SeattlePI’s Todd Bishop has some awesome video footage of Microsoft’s Sphere being demoed at the Microsoft Faculty Summit. 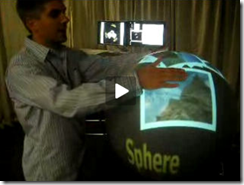 From SeattlePI’s story to appear on Tuesday:

After months of rumors, Microsoft researchers are taking the wraps off a prototype that uses an internal projection and vision system to bring a spherical computer display to life. People can touch the surface with multiple fingers and hands to manipulate photos, play games, spin a virtual globe, or watch 360-degree videos.

Sphere, as it’s known, is expected to be shown publicly for the first time Tuesday at Microsoft’s Faculty Summit in Redmond. For now, it’s purely a research project. The company says it doesn’t currently have plans to offer it as a product. The idea is to see what the technology can do, and how people will use it.