Microsoft isn’t holding any punches in its fight against Google’s Gmail, and it isn’t just using ads from its Scroogled campaign to get its point across. Starting today, users moving to Microsoft’s Outlook.com service can important the contents of their entire Gmail account with a few button presses.

Microsoft announced the Gmail Import Tool in a blog post this morning, noting that “discontent with Gmail seems to be on the rise.” Effectively, Microsoft is hoping that more users will switch from Gmail if they make it easier to do so. Starting today, users can log into or sign up for an Outlook account and head to its options panel to open the Gmail Import Tool. There they’ll be prompted for their Gmail username and password so that Outlook can copy all of their existing email into their account. Once the importing is done, the Gmail Import Tool will send the user an email describing how to forward new email directly to their Outlook account going forward. 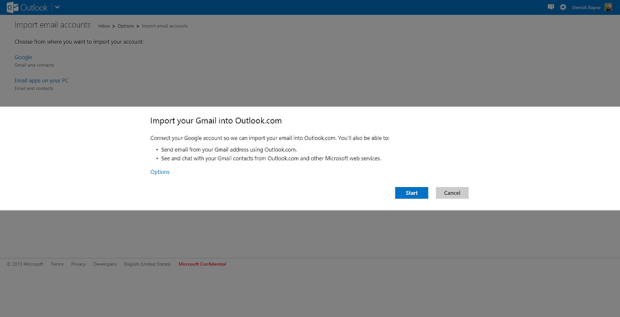 According to market research cited in Microsoft’s release, 1 in 4 users told the Ipsos research firm that they “would switch email providers if it was easier to do so.” Microsoft’s post also says that 70% of users indicated that ads not “interfering with their email experience” was important to them. That’s a key metric here since Microsoft has used Gmail’s practice of scanning user’s emails to present them with more relevant advertisements as a way to inflict damage on the service’s reputation in the past.

In all fairness, the grudge match between Microsoft and Google seems to have started after Google announced that Gmail would discontinue its support for Microsoft’s Exchange Active Sync technology. This would have left new Windows Phone and Windows users without a way get their email from Google’s services other than through a web browser. Though the two companies worked together to buy users more time until the switch, Microsoft eventually had to add support for Gmail’s new way of giving users access to their email.

Since adding support for this OAuth method of communicating with Gmail, the war between the two companies had been quiet.

Microsoft says that the new Gmail Import Tool will begin rolling out to users today. It hasn’t provided any guidance for how long that roll out will take.