It looks like Verizon is getting ready to launch the unannounced Galaxy Stellar by Samsung, which will feature 4G LTE network connectivity. The smartphone, which is expected to be priced at just under $100 with a two-year service agreement and after a $50 mail-in-rebate, is a mid-range handset. According to the leaked marketing display information for the Galaxy Stellar 4G LTE, not much is known about the phone’s specs. 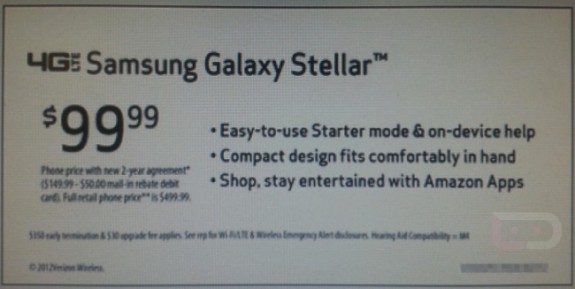 What is known is that it will utilize a ‘compact design that fits comfortably in the hand’ and will feature Amazon’s Appstore for Android. It’s unclear at this point if Amazon’s Appstore will be the exclusive apps marketplace for the Stellar or if Google Play Store will also be pre-loaded. According to the marketing display which was posted on Droid-life, the phone will also have an ‘easy to use Starter mode’ featuring ‘on-device help’ access.

It’s unclear when the phone will launch. In addition to the rumored Galaxy Stellar, a previous leak suggests that Verizon is close to launching the LG Intuition 4G, which is an LTE-enabled re-branded LG Optimus Vu phablet with a 5-inch display.

The Stellar will fit nicely under the Galaxy S III flagship and will offer customers on Verizon’s network a nice alternative to the flagship Samsung model if they don’t need or want all the features of the Galaxy S III.