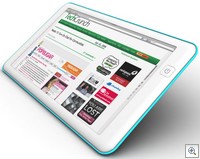 I find this fascinating. Mike Arrington of TechCrunch fame is asking for folks to help build a “dead simple web Tablet” that will cost under $200. The other specs on his wish list:

The machine is as thin as possible, runs low end hardware and has a single button for powering it on and off, headphone jacks, a built in camera for video, low end speakers, and a microphone. It will have Wifi, maybe one USB port, a built in battery, half a Gigabyte of RAM, a 4-Gigabyte solid state hard drive. Data input is primarily through an iPhone-like touch screen keyboard. It runs on linux and Firefox. It would be great to have it be built entirely on open source hardware, but including Skype for VOIP and video calls may be a nice touch, too.

I think he’s serious as he says he’s organizing a team of folks to spec it out and that marketing docs are coming soon. They are looking for folks to help withe customized Linux and Firefox code.

Given the NetBook (or whatever you call it) craze, Fujitsu’s reaction to it, Apple’s intransigence or inability about coming up with a Tablet, wouldn’t it be intriguing to see something like this get off the ground and actually fly, sparked by this kind of input?