Qualcomm executive VP of CDMA Technologies, Steve Mollenkopf, talked up another division of the company, mirasol, whose displays should not only meet color e-ink at market, but beat it on several levels. 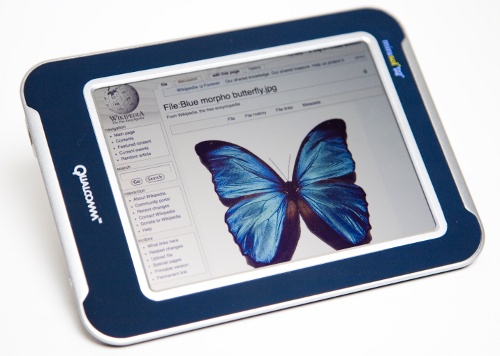 To be clear, e-ink or electronic paper is a distinct technology from E Ink Corporation, not generic. mirasol (no caps) is a different technology called interferometric modulator display based on the shimmering scales of a butterfly’s wings. Like LCD, it uses RGB subpixels to generate colors but requires far less energy and is reflective, allowing for superior sunlight visibility. Very similar in function to e-ink, but with refresh rates fast enough for video. Or as Mollenkopf put it at the Pacific Crest Securities Technology Leadership Forum (via ZDNet):

I think we’ve been able to show that the product itself works and is compelling. (With) video, it has update rates that are consistent with the way these high-quality UIs work. And the high-quality UIs, by the way, have very, very fast peak frame rates because people like all the transitions and things like that.

You can actually do this on a display that essentially has the same power profile of the E-Ink displays, which you have in Mirasol or in the [cable] devices today. So it’s very compelling if you can put color and video together with that use case. But in order to win that, really for us, it’s about showing that we can produce the production [ramp].

Slashgear followed that up with Jim Cathey, VP of business development for Qualcomm’s MEMS division, which produces the mirasol displays. According to him, commercial products can be expected in Q1 2011, about the time E Ink expects to debut with color. Going to be an exciting time for eReaders.