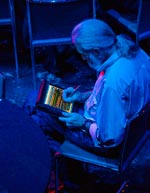 The new iPad has taken over the interest of most consumers, but when it comes to using a tablet at work, the iPad isn’t the best fit for demanding in-the-field jobs.

Case in point. Running the sound board for a Texas Swing band. Sure the iPad has tons of DJ and audio apps, but when it comes down to delivering the best concert experience available, sound technician Jim Finney, turned to a Motion tablet.

The Motion J3500 is a windows tablet that allows Finney to walk the concert hall, house or outdoor arena with his entire audio mixing rig in his hands. The tablet has several key features that make it perfect for the job at hand — making music sound great for everyone.

Finney shares why he picked this tablet, and how he uses it during shows in demanding environments, in the video below. Finney is a sound technician for the Kings of Texas Swing, Asleep at the Wheel, a group that has put out 25 albums over the past 40 years. 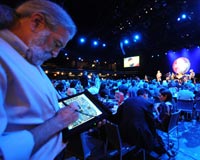 Mobility – Instead of being tied to the technician booth, Finney can walk to where the problem is and adjust it from his tablet PC. This means no more walking, listening, trying to fix and repeating. The Motion J3500 connects to the Yamaha M7CL-V3 Audio Mixing Console. That freedom and mobility is an important part of delivering the best concert experience to everyone at the show.

Visibility – When you have to mix the audio at 10 AM in the texas sun, you can’t run to the shade to make adjustments. The Motion tablet has great outdoor visibility, which lets Finney work wherever the Swing takes him.

Durability – Motion tablets can handle more than the average laptop. From the rain and mud found at outdoor festivals to the dust kicked up by the crowd, Motion tablets are designed to handle varied environments.

Connectivity – Finney also said that the Motion J3500 delivered better wireless range and connectivity than a previous convertible tablet, key when you’re roaming all over a concert venue.

“I’m a 40 year engineer, and when I started this, it was two tin cans and a piece of string. To be able to carry the Motion Tablet PC to every venue we go to – there is not a place that I cannot use it – it’s changed my life,” said Finney. “The difference from being locked into a single position is unbelievable, and the comments from our audiences support it. I consistently have people coming up to me and saying ‘this is the best sounding show I’ve ever heard ‘.”

Motion shares the rest of the mobility study on their website. One of the most interesting aspects is that the Motion tablet has allowed Finney and Asleep at the Wheel to reduce the costs associated with lugging equipment around, reduce rental costs and increase the number of people who can see a show since there is no front of the house audio booth.