Sony, makers of the PS4 gaming console, has never been ashamed of exploiting key weakness in Microsoft’s Xbox One strategy. Last year, the company used its press conference at the Electronic Entertainment Expo to highlight the Xbox One’s rumored lack of independently developed games and unfriendly policies. Today, it’s showing off MLB 14: The Show, an upcoming baseball game that has no actual competitor on the Xbox One.

Sony showed off the upcoming game in a video posted to its PlayStation Blog earlier this week. The video of MLB 14 The Show itself really goes out of its way to highlight the upgraded graphics and game mechanics that users can expect when the title launches on the PS3, PS4 and PS Vita on March 6th.  However, it’s a short post about the features the game also includes that aren’t in the video that’s getting the most attention. 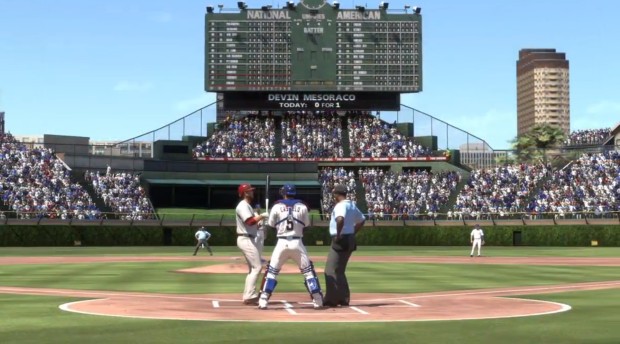 Sony says that the game will support save syncing when it debuts. This will allow users to have one persistent profile that roams on whatever device they’re playing MB 14 The Show on. In effect, Sony is playing to its own strength. Today, only it has the ability to make detailed video games available to users on their console and in their pocket and link between the two in any meaningful way. Nintendo has a both a portable console and a living room console, but users don’t necessarily get a cohesive experience between the two. Microsoft does make Xbox Live games that are available on Windows Phone, Windows notebooks and tablets and the Xbox One, however the Windows Phone and Windows versions of Xbox Live are now where near as robust as what Sony offers users. Really, they are just mobile games available on larger screens.

Twisting the knife and highlighting Microsoft’s failure to make Xbox Live compelling outside the living room  is very smart.

Of course, that’s only half the reason users are excited for the game. MLB 14 The Show sounds like a great game. Users can not only expect better graphics that show player’s faces and uniforms in better detail, the game’s developers have also taken the time to give the stadiums in which players play games the respect and attention they deserve. The stadiums in MLB 14 exhibit their own distinct look and feel. According to a video about the changes, the extra processing power that the PS4 provides has allowed the game’s developers to include every intricate detail in all 30 of the game’s stadiums. For example, each stadium in the game has more detailed graphics for each section of the stadium. A new lighting system also adds shading and context to what time of day it is and where an object is located in each stadium. Crowds in each stadium are also more detailed, and each blade of grass in the field is dynamically created to behave in the same manner as a real bade of grass would if it too were blowing in the wind.

The hope is that these changes will enhance the sports simulation and give users the feeling of actually playing as a pitcher in the real Yankee Stadium.

New Community Challenges can be created by players and shared with their friends for a bit of added fun outside of exhibition and franchise games. The idea is to let players create situations and then compare how they and their friends handle them. An example given by the development team is over trying to catch a runaway ball that’s near the outfield. How different players try to prevent a run or catch the ball is part of the fun. A repository of created challenges is included in the game so that users can hone their skills at a moment’s notice. Leaderboards will keep track of how friends compare in each Community Challenge, ensuring that players taking part in the challenges feel like there’s a real competition going on between them and their PS Network friends.

All told, MLB 14 The Show looks like a very competent and detailed baseball simulation, which makes the fact that Xbox One users won’t be getting it sting that much more. To date, sports fans have just a few games to play on the Xbox One and neither of them are baseball related. What’s more, both are also available on the PS4. They include NBA Live 14, NBA 2K14, FIFA 14 and Madden 25. The thought process is simple, big time baseball game fans are better off picking up a PS4 right now. That could change at some point but that’s the way it is today.

The PS4 is already available on store shelves for $399.99. MLB 14 The Show itself will cost new buyers another $59.99 on the PS4 and PS3 when it launches on May 6th. The PS Vita version of the game will cost $39.99. Unfortunately, there aren’t any bundles with the game included.