MLB 15 The Show is confirmed and will release next year on March 31, 2015 — just in time for opening day of the MLB season. Pre-orders started earlier this month, but Target is offering a good deal for those that pre-order the game on PS4.

Los Angeles Dodgers outfielder Yasiel Puig is the game’s cover athlete for MLB 15 The Show, but unfortunately the game is sticking exclusively to the PlayStation console, while the Xbox is still without a proper baseball simulation game.

With the discontinuation of the MLB 2K series from 2K Sports, the Xbox is left without a decent baseball simulation game. Major League Baseball itself stepped in and released RBI Baseball 14 for Xbox One earlier this year. While the game is essentially a hat tip to the classic franchise of the 90s, it simply sucks, and baseball fans are still left without a solid baseball game for Xbox. 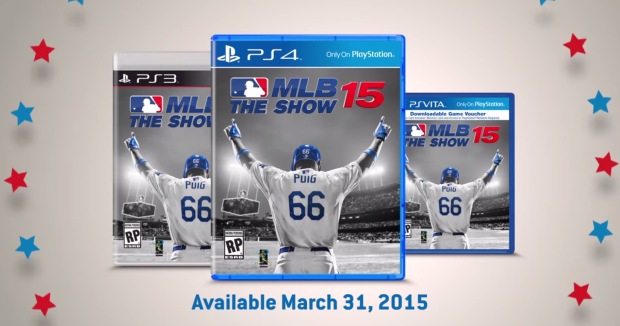 New features for MLB 15 The Show haven’t been fully disclosed yet, but gamers can expect better graphics, and improved performance overall, including faster load times and better emotions from players. One thing we do hope is that commentary is improved, as MLB 14 The Show and past iterations have been rather mediocre when it comes to broadcast commentary from the press booth.

One of the hottest exclusive titles for the PS4 is the MLB The Show series, and as the only true baseball simulator video game out on the market currently, the game provides gamers with a one-of-a-kind experience that you can’t get on any other platform.

However, while the game is really fun to play, its simulation style comes with a bit of a learning curve. Gamers who are new to the series most likely won’t be able to just jump right in and start dominating right away. As with any true simulator, it takes time to learn the hitting controls and get a feel for the gameplay in general, but we suppose that’s what makes it fun to play.

As with any sports game, MLB 15 The Show will include many of the same elements of the previous version, and most of the gameplay elements will be carried over from MLB 14 The Show, so don’t expect this new version to be a completely overhauled video game, but you can expect new players, and updated rosters.

This is especially good news, as MLB teams have been busy this off-season making some roster moves, with the White Sox being a big headliner over the last few weeks, signing ace pitchers Jeff Samardzija and David Robertson, as well as strong batters Melky Cabrera and Adam LaRoche.

It should be another interesting year for all of baseball in general, and you’ll soon be able to follow right along by playing MLB 15 The Show on the PS4, PS3, or the PS Vita.