There are few things that annoy me more than Mobile Apps on smartphones and Tablets that beg, plead, nag, cajole, request and hint for ratings or a review. Well, there are lots of things that annoy me more. But these days when it comes to Mobile gadgets on which we can control most notifications it seems like we need to have OS developers allow users an option to turn off this begging. Invariably I see these nags pop up at least twice a day. Some times more. And they always find the most annoying time to intrude. It’s time for a better system so App developers can quit begging for ratings.

Here’s the thing. I understand why App developers need to ask for our approval. Some of these folks are trying to make a living providing us with Apps. It’s a crowded field. Most Mobile Apps are junk or worse, and discovery of good Apps is tough. Ratings with stars and good reviews help an App climb the ladder in App store search engines in hopes of separating the wheat from the chaff. But the current system has turned into one big mobile gluten allergy. 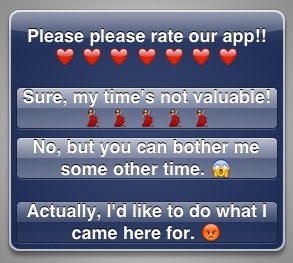 Some App developers have gotten a little better by including an option for the user to never be asked again for a rating. That’s great and deserves kudos. But even the act of making that selection takes us away from the task we were trying to accomplish. There was a time when I thought I’d strike back with one star recommendations for any App that begged for a rating. I also wished that some benevolent App Store engine in the sky would assign one star ratings to every App we refused to rate. But that would be unfair to the developers who do work hard to turn out a quality product, even if their marketing mavens think they should weaken our response to that work by pretending to be a street hustler at a stop light.

There does need to be a better way for consumers to discover Apps. No question. But this isn’t it. The App Store’s all need some attention to this kind of thing. Like movies, plays, and restaurants, I invariably don’t pay attention to “user” reviews on App Stores because I know that in today’s world separating out the thoughtful from the reactionary is tough, and occasionally these systems get gamed.

In closing this rant, let me relate a story about my daughter. She was six years old at the time. I had just produced a production of William Shakespeare’s Two Gentlemen from Verona, and prior to every performance I would take her to the theatre and she would watch and participate with the actors in their warm-ups. She loved the show. We’d stay and watch the first act each night and then head home after the intermission. She was of an age that I would often walk with her riding on my shoulders. One evening, as we were heading home she saw a poster for the show in a store window along our route. She got excited about seeing the show and asked me what that was. The conversation went like this: