My wife and I worked for a couple of hours from home before jumping in the car to drive down to Palo Alto, where she works and I have a couple of meetings.  She didn’t miss a beat of her work day as we drove from San Francisco down to Silicon Valley. She was multi-tasking thanks to her array of gadgets, which I snapped a photo of once we parked.

In a lot of parts of the world, people might assume this spread of gadgets would be owned by die-hard gadget enthusiasts, but here in Silicon Valley they’re simply tools of the trade. It’s very common to see workers around these parts with a pair of smartphones and a bunch of other gadgets spread out at cafes. 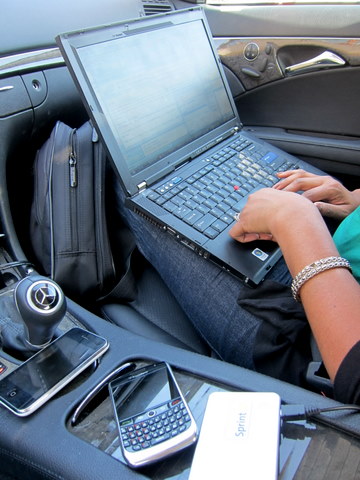 So what does my wife use to go mobile without being missed by her colleagues? Her company, a large enterprise software company, has issued her a Lenovo ThinkPad T400 with a 9-cell battery that’s her workhorse. Her company-issued mobile phone is a Blackberry Curve 8900 with T-Mobile service. While in the car she uses my Sprint MiFi card to get online. Hooking into her company’s VPN with her ThinkPad T400 requires using an RSA SecureID card. She often uses her iPhone 3G to place and receive calls while viewing documents and email on her Blackberry when it’s inconvenient to use her ThinkPad.

It’s interesting to note that on today’s drive she ended up using three out of the four national 3G networks. I’ll let you guess which of the three dropped her connection a couple of times (hint- it’s the one with the super annoying ads featuring a famous actor claiming superior coverage).

Our car is pretty well outfitted when it comes to charging options. There’s one DC Outlet at the rear of the center console and another in the ashtray. We keep a Micro USB adapter plugged into one and a power inverter plugged into the other. The power inverter has both an AC outlet and USB outlet, where an iPhone/iPod adapter lives.

Our car has a very nice voice-activated entertainment, navigation and communications system. It’s not as polished as Ford and Microsoft’s Sync system, but it definitely helps keep your eyes on the road and your hands on the steering wheel. The voice recognition technology is licensed from Nuance, the company that makes Dragon Naturally Speaking, and it’s learned our voices over time.

Her employer, a giant European software company, provides  high-quality gear for its employees and I’ve witnessed first-hand how it’s made my wife work more effectively. Having the right tools for the job can make a big difference. A lot of other companies here in the valley issue grade-A gear for the same reason.

Unfortunately, that’s not always the case. The last big company I worked for (about 5 years ago) was penny-wise and pound-foolish. Back then I spent most of my workday visiting with tech clients in San Francisco and Silicon Valley. Rather than issuing us smartphones or wireless data cards we had to drive to the nearest Kinko’s/Fedex store to get online with a good old Ethernet cable. There were days that I’d have to go do this four or five times to get updated proposals from headquarters and follow up with clients. The old office also employeed one assistant for every two of us int eh field to help bridge the gap. The assistants would shuffle documents around the Internet for us, look up clients’ addresses and other menial tasks. All this in an effort to avoid the cost of a Blackberry data plan.

The car has an iPod dock in the glovebox, along with an audio cable that we sometimes use to listen to Internet radio via Slacker and Pandora.

Sometimes I can’t help feeling proud of my mobile gadget wife when she’s being so geeky without even knowing it.