Being on a motorcycle doesn’t have to mean the loss of connectivity, music, or even the ability to talk to Siri.

Using the Sena SMH5 bluetooth headset inside a helmet makes any of the above tasks possible with a simple click of a button or turn of a jog dial.

The SMH5 specs are impressive, the install is simple and the usage is what one might expect from any other hands free Bluetooth device. 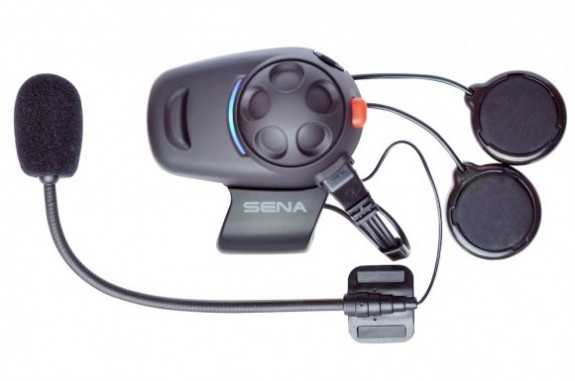 The SMH5 Unit from Sena is on the lower end of their offerings which results in a shorter intercom range and a little less battery life than their big boy SMH10.  But, with that tradeoff, one can still get a feature rich bluetooth headset for a great price and a smaller helmet unit. 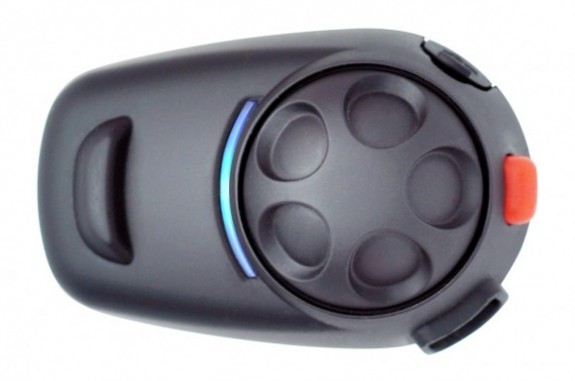 The Bluetooth 3.0 inside the unit offers up many of the common features giving the ability to hook up a helmet to phones, GPS devices and music players.

The Sena headset has all the common bluetooth functionality as a normal hands free device:

The battery is going to last about 8 hours and have a standby time of 7 days, which isn’t bad for a unit that’s only 2.8 in x 1.8 in x 1.2in in size and weighs only 1.42 ounces.  If using the intercom with another rider, the range is about 430 yards and can pair up with 3 other Sena units, though it doesn’t have to be another SMH5 either.

It’s a great little package to add some connectivity between electronic gadgets and the rider inside the helmet. 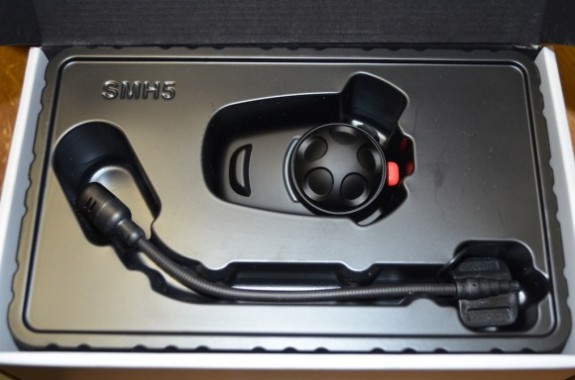 Inside the box is everything needed to install the headset inside a helmet.  The main unit is there with 2 different options for mounting the unit.  The first option is a ‘stick on’ mount.  This option might be better for oddly shaped helmets or somebody that doesn’t like to have a solid mounted accessory to the side of their helmet. Also included is a clamp bracket that mounts onto the side of your helmet. Using the included allen key this option creates a more permanent and solid attachment to the helmet.

Digging deeper into the box we find many other items for the install.  Since every helmet is different, the kit comes with a universal boom microphone and a set of speakers with plenty of wire for just about any helmet.  Mounting the boom and speakers is accomplished with included velcro attachments.

There is a USB cable included in the package for charging, but no wall charger. 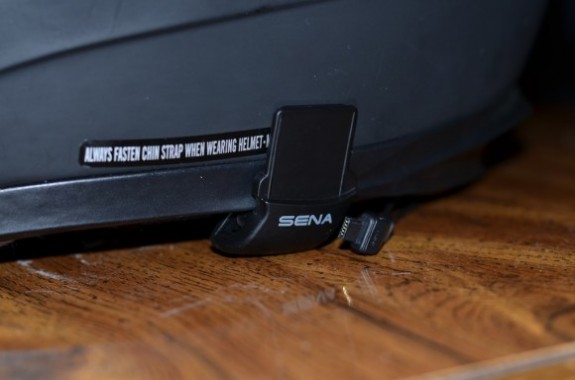 Install of the SMH5 is a snap.  I have two different helmets, so I used both the clamp and stick on options.  The pictures show the clamp version, but the stick on is very similar.

Using the included allen key, the clamp installs on the left side of the helmet.  For those that have never been on a motorcycle, left is the only option because the throttle is controlled by the right hand.

Once the clamp is installed it’s time to mount the speakers and run the wires.  The included velcro attachments make this process simple.  The ample amount of wire made it easy to run between the pads and around to the main unit. 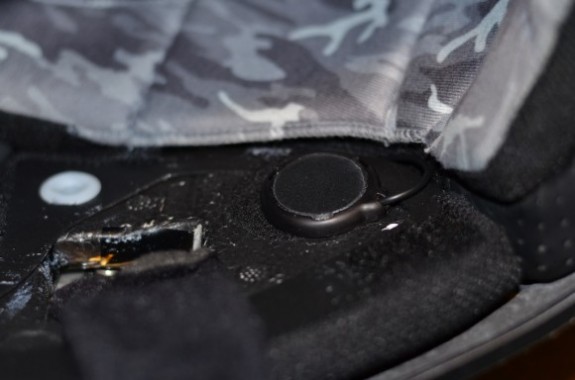 The mic boom was just as easy to install.  The base of the boom is mounted using velcro leaving the mic free for placement just about anywhere inside the helmet.  In my full face helmet I also was able to use the second ‘guide’ attachment to secure the microphone from moving around. 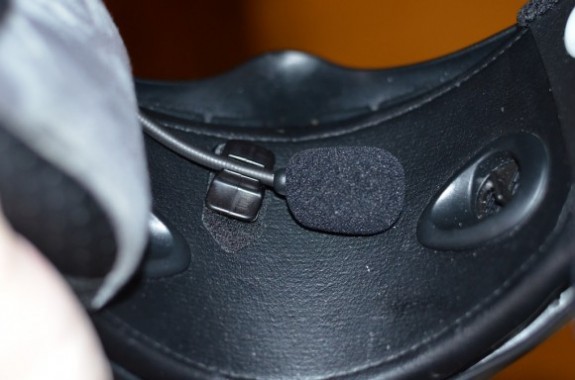 it’s been quite fun using this headset when out on the road.  The connectivity is great, sound quality is as to be expected and while I don’t use the voice part very often I’ve never had any complaints about the sound quality.

My main usage for the SMH5 is to have some background music when I go out riding.  The volume on the unit can get pretty loud inside the helmet, but for me it’s usually about 50%.  I like to still be able to hear what is going on around me, but also have some tunes in the background.  The 50% mark works out just about perfect for me.

Sound quality from the speakers? They sound good, but audiophiles would probably not be too happy. But what can you expect from speakers that are less than ¼ deep?  I use the iPhone 4S and it pairs perfectly with the SMH5. 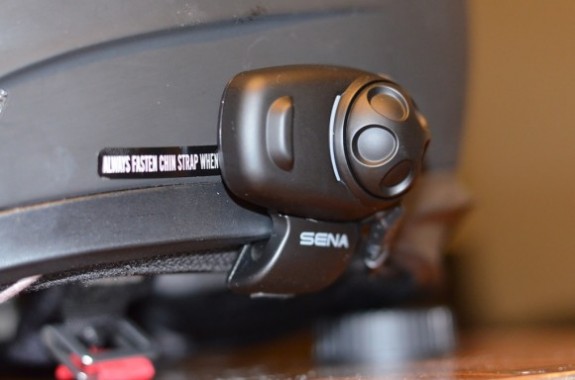 The phone function works great with the iPhone.  Previously it was a real pain when I needed to make a call.  But now, I don’t have to take my helmet off for a quick ‘check in’ with the wife.  Taking calls is just as easy pushing the red button on the back of the unit.  I’ve done it a couple of times when riding, but I’ll answer the phone and tell them to hold on while I find the next safest place to pull over.

To my surprise, Siri works wonderfully from inside the helmet.  I can push one button on the headset and start asking for directions or sending a text.  There have been quite a few times where I have ‘run into traffic’ and had to tell my wife I’ll be a little late via text message.  We’ll not tell her that I might have just gone a little farther than I thought!!  Another time I was a little far from my normal riding area and was able to ask Siri where the closest gas station was located.

Yes, all of these things could be done without the SMH5 from Sena, but being able to do it all without taking off my gloves and helmet make a world of difference.

The Sens SMH5 motorcycle headset has been a great addition to the inside of my helmet. Sena provided the review unit, but it’s a gadget I would definitely buy for $130. If you have a riding partner there is also a two pack kit available for $250.00.

The unit is big on features but small in size and the feature set is large enough for a majority of riders.  Long distance cruisers might want to still look at the SMH10 for the extended battery life and greater connectivity options.

This is a “guest post” by Matt Faulkner. Matt used to post regularly on GBM back in the “Tablet PC” days, and is still around managing some of the behind the scenes stuff. The Sena review unit comes his way via a website he created, Footshifted.com, about his other passion, motorcycles. Some long time Tablet users might remember Matt from earlier postings.