Mobile payments aren’t new to the tech-obsessed, but using a smartphone for payments isn’t mainstream yet.

According to a recent Pew Internet & American Life Project survey, a majority of Americans will be using mobile payments by 2020.

By 2020, most people will have embraced and fully adopted the use of smart-device swiping for purchases they make, nearly eliminating the need for cash or credit cards. People will come to trust and rely on personal hardware and software for handling monetary transactions over the Internet and in stores. Cash and credit cards will have mostly disappeared from many of the transactions that occur in advanced countries.

The statement implies that within eight years, people will be more comfortable using their phones to pay for goods and services. 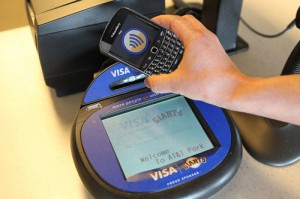 If more people are comfortable using their smartphones for mobile payments, there will be less need for cash or credit cards. Instead apps will either make the payments directly through the web or use NFC.

Read: Google Might Be Willing To Pay Carriers To Support Google Wallet

We already know many iPhone users would like to use their iPhones as credit cards, so there’s already a good number of people who feel comfortable with mobile payments. The trouble is, not everybody’s phone supports mobile payments.

There are some Android phones on Sprint that can use Google Wallet thanks to their NFC chips, but few stores support it. Companies like Square, PayPal, and LevelUp have apps that do mobile payments as well, but they are also only accepted in a few places.

The argument can made that smartphone users would like to use their phones for mobile payments, but they don’t want to deal with competing services. Small businesses in cities like New York and San Francisco can accept payments from one of these services, which is great, but you need to remember which store accepts which service.

MasterCard’s PayPass offers Google Wallet payments at a number of retailers, but there are still too many retailers that don’t support mobile payments for the average user to leave home without cash or a debit card.

Americans might be more comfortable with mobile payments by 2020, but we need more phones that can use mobile payments and more stores that accept them before they become the standard. Some standard services would be nice as well, but choosing which app to use in each store is still faster than using a wallet.