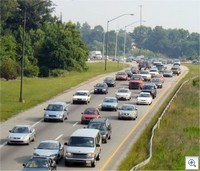 I’m going to blame Eddie. He’s the one who named the InkShow “Pray You Get Stuck in Traffic.” This morning was just one of those mornings on the road. I left the house with the intention to head to my office for about an hour’s worth of work and then head to the theatre for the afternoon performance. After pulling into a gas station half-way there, I realized life on the road was not going to go well. It seemed like every truck hauling a trailer or boat on the East Coast was trying to get into the same gas station, which on a good day doesn’t have room for the car traffic it attracts. After a 20 minute excercise in small parking lot hell, I got back on I-81 to head to the office, about 5 miles away. After 1 mile I ran into stopped traffic. Obviously there was an accident ahead. A few minutes later it quickly became apparent this was going to take awhile. So, I whipped out the Asus R2H to view Eddie’s GBM InkShow.

Here I was stuck in traffic watching Eddie show off the StreetDeck software, while making a gazillion phone calls to other staff and our cast to let them know about the tie-up and to avoid this route.

I have to say though, watching the InkShow, it makes one long for a few things.