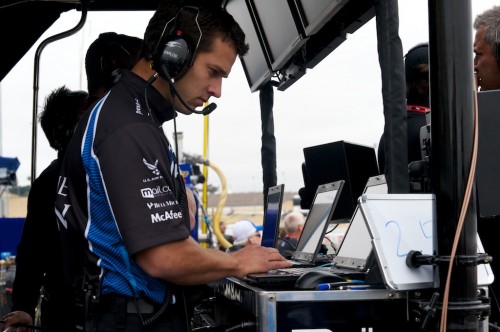 I spent last weekend at Infineon Raceway with the de Ferran Dragon IndyCar team. The team is sponsored by HP and co-owned by the CEO of Seagate. As you can guess, tech is emphasized quite a bit around the team’s garage and in pit lane.

IndyCar race cars have telemetry that transmit data back to the crew in the pits so they can make decisions that can be make the difference between winning and losing. There are a ton of sensors that measure pedal pressure, throttle, fuel levels, temperature and more. There’s a lot more on-car gadgetry on these low-profile cars than on NASCAR race cars, which don’t even have gas gauges. This means NASCAR teams have to do take a lot more notes, make calculations on the fly and enter data manually. On the other hand, everything is neatly fed into IndyCar teams’ applications.

As we saw a few months ago, most NASCAR teams use Tablet PCs. The Red Bull racing team uses MobileDemand xTablet T7000s, which seems like the perfect tool for the job considering many team members need at least one free hand at all times and they run around a lot. Others use Motion Computing and Lenovo ThinkPad tablets to take notes and punch in data. But this sort of data entry simply isn’t necessary for IndyCar teams.

IndyCar teams still generally need powerful and reliable machines. The teams travel all over the globe and often find themselves in hot environments. Working outdoors means a matte display is a must. At the racetrack, several teams were using HP EliteBooks and Lenovo ThinkPads. A couple were using Dell Latitudes. All of these seemed like good choices for the tasks at hand. But two teams were using consumer-grade notebooks that had no business on the racetrack. Working outdoors with a glossy screen on a 15″ Dell Inspiron that you can pick up at Wal-mart doesn’t make a heck of a lot of sense, especially when you’re spending millions of dollars on the whole show. That kind of machine might serve home users just fine, but it’s simply not built to put up with the rigors of racing. I’d sure hate to be the guy that has a PC go down in the middle of the Indy 500.

In a world of literally hundreds of PC options there’s no ‘perfect’ PC. There are however proper PCs to use for certain jobs. I recommend spending a few hundred extra dollars to get the right PC, especially if you have millions of dollars of equipment on the line.  Do you have the right PC for your job?

You can read more about the de Ferran Dragon IndyCar team and technology at the track over at Notebooks.com.