As a MobileMe subscriber I am excited to read that Apple will be giving me a 25GB iCloud account to replace my MobileMe account.

I can use it for no additional cost until June 30, 2012. The 20GB account plus the free 5GB will give us plenty of storage and far more than we ever had with a basic MobileMe account.

However, my excitement waned when I learned that the primary purpose for which I bought a subscription goes away with iCloud – sync of settings.

With iCloud, one of the most interesting new features in iOS 5 which will release today, you get online storage, backup and sync of 5GB for free. Users who didn’t have a MobileMe subscription can buy a 20GB plan for $40/year. A 55GB plan costs $100/year.

MobileMe never took hold with users and few of us actually signed up. I wanted the ability to sync my data and settings between computers once I got my second Mac. But was this really worth the $69 I paid Apple for the privilege? No! I would not have signed up for a second year unless things changed drastically. And now they have.

With iCloud you get data storage in the cloud. That alone might be worth something since no one gives you as this much backup space for free. In comparison to some of the other online storage services, iCloud looks like it has a competitive feature set. Better than just a backup/sync service, iCloud will let you store all of your content purchased from Apple’s various media stores – music, video, apps and books.

Apple often does right by its users and this is welcome news for those who used MobileMe primarily for storage and personal information management. Suddenly my MobileMe subscription doesn’t look like such a horrible choice, especially since it was set to expire in March and will now be extended to June with more features.

The lack of settings synchronization disappoints me so I’ll be looking for a new solution to keep all my Dock icons, email accounts and program settings in sync between my computers, but the original price wasn’t worth it for this feature anyway. 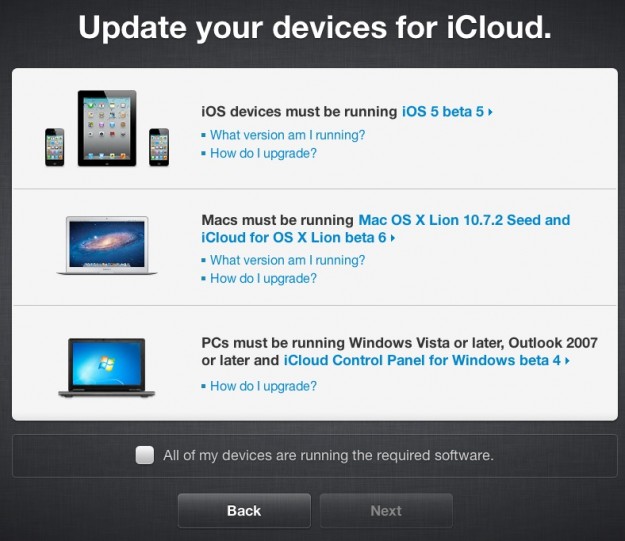 Requirements for MobileMe to iCloud migration

The new iCloud web site is live without the beta moniker. However, it won’t be that useful to you unless you have Lion 10.7.2 and iOS 5. MobileMe users can migrate their account at the Me.com site. After you get iOS 5 you will be able to take full advantage of the iCloud site.