We’ve heard rumors of a new Maps app in iOS 6, and some new information gives us a better idea of what the new app might look like, if and when Apple announces it.

The new information comes from BGR which also put together the mockup shown below. From the mockup we see that in addition to changing the map tiles, Apple is redesigning the UI in the maps app. The new UI gets rid of the blue bars on the top and bottom of the app, replacing them with a single silver bar at the top and some floating icons in the lower left corner. 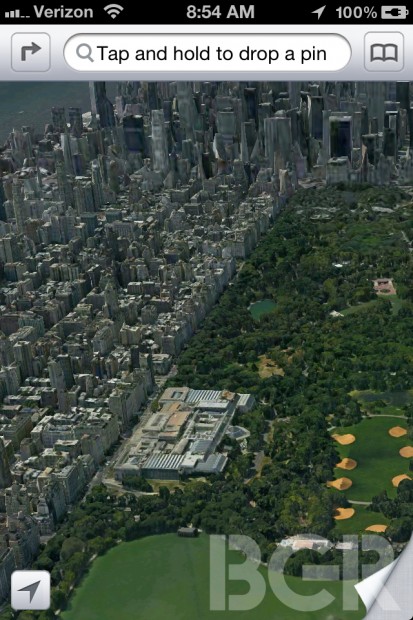 The new design lets gives more screen space to the actual maps and not the UI around them. Paired with the rumored larger screen in the iPhone 5, the new app will offer users a lot more than the small square of map tiles offered in the current app, if the mockup is on point.

According to the information given, the location button is now a free-floating button in the lower left corner. It’s joined by an option for 3D maps when users turn on that option in the settings menu underneath the fold in the lower right corner.

The new UI could mean we’ll see some design changes in other stock iOS apps. The Maps app has looked the same since the debut of the iPhone, and always sported the default blue UI. This new app could mean Apple is moving to a more streamlined, silver UI design in other apps.

The mockup certainly looks nice, but it doesn’t mean the new app will look exactly the same. The non-mockup images in the BGR gallery are just photos taken of someone holding a device that’s using the app. None of the images show the full app, just small sections of it.

We’d like to see a new maps app like this mockup, but there’s no guarantee we will.