A giant mechanical spider made an appearance at CES 2013 and the guys who built it were kind enough to let us take it for a test drive. The Mondo Spider is part work of art, part engineering testbed and all kinds of awesome.

The Mondo Spider was built by a team of Vancouver-based artists and engineers back in 2006.  In 2010 the team ripped out its engine and replaced it with an electric motor, allowing it to charge from solar power and claim the title of “first zero-emission walking vehicle.”

The Mondo Spider measures 8ft wide and weighs in at 1600lb. There’s a single seat in the middle of the spider for a driver, who controls the Mondo Spider with a pair of throttle sticks, each of which controls four legs. Pushing forward or backwards on both sticks at the same time drives the spider in the expected direction. Moving one stick back and the other forward spins the spider in place. The Mondo Spider can travel at a fast walking pace, though it seems like it goes much faster than that, especially if you’re in its path. The clanking sounds and its size can be intimidating.

After one of the Mondo Spider’s creators explained that it drives just like a tank, jumping in the cockpit and walking it around a courtyard was incredibly easy. 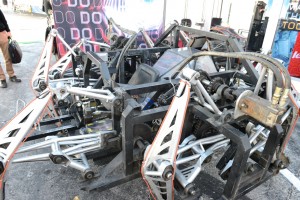 So what exactly was this giant spider doing at CES 2013? The Mondo Spider was at the Lenovo booth as an example of what “Do-ers” can make with the company’s PCs. The eatART team used AutoCAD to design and build the Mondo Spider and the Titanoboa, a 50ft. mechanical snake that can be controlled with an Android app. Neither of these creations are going to be sold to consumers anytime soon, but it was refreshing to see them amidst the sea of big screen TVs and iPhone accessories.

We’re not sure if there’s a real use for the Mondo Spider out in the real world, but that doesn’t mean we don’t want one. It’d be a heck of a lot more fun to run to the grocery store in the Mondo Spider than in the family hauler.