Like the iPhone versions of the Juice Pack the Galaxy S III version plugs into the charging port on the bottom of the device and adds an extra battery on the back. The case is a two-piece slider with a hole at the top for the camera, flash, and speaker. The Juice Pack for Samsung Galaxy S III almost doubles the thickness of the phone to about 17mm (from 8.6mm) and about doubles the battery life.

The case also adds a few millimeters to the bottom of the device where the charging port is, and to the sides. 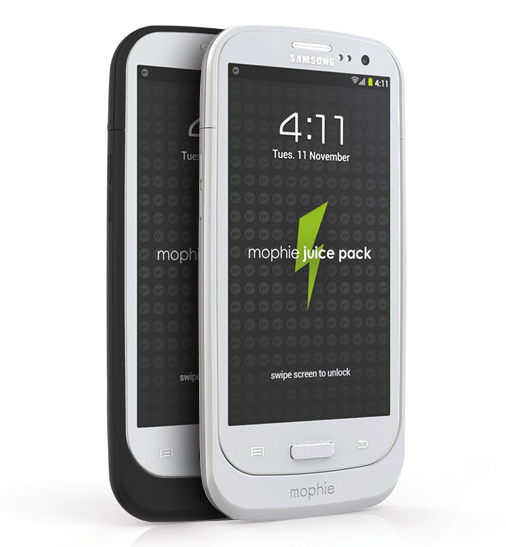 Mophie claims the battery case will add seven hours of 4G talk time and 9 hours of Internet browsing to the Galaxy S III.

Mophie also claims the battery case doesn’t interfere with the NFC of the Galaxy S III. So Galaxy S III owners who use Google Wallet, or who just like sharing websites, photos, and videos via NFC don’t have to worry about it breaking those features.

The Mophie Juice Pack for Samsung Galaxy S III comes in black and white, and is available now for $99.95.

The Samsung Galaxy S III arguably doesn’t require a battery case because it has a removable battery. This solution is a bit easier, however, because users can charge the case and phone at the same time without having to buy anything extra or swapping the batteries out while charging.