The Mophie Juice Pack Air for iPhone 5 is the company’s second battery case for the iPhone 5, and the first one to add almost double the battery to Apple’s smartphone.

The Mophie Juice Pack Air for iPhone 5 covers the back and side of the iPhone 5, making the phone about twice as thick as normal. The case also adds a few millimeters to the sides of the device plus a chin below the phone that’s about a centimeter long.

The “chin” is there to hold the Lightning connector to charge the iPhone as well as the micro-USB port to charge the case. It’s location makes it difficult to get to the headphone port, though the case comes with a short pass-through cable so users can use any headphones with the case. 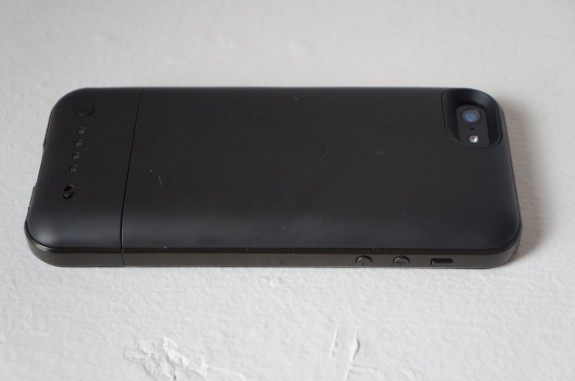 Headphones with straight jacks like Apple’s EarPods will fit through the hole, though users will have to use their fingernails to push those headphones into place. The Micro USB port allows users to charge the case and the iPhone with a standard charger, but users cannot sync to iTunes with this pass through connection.

While the Mophie Juice Pack Air doubles both the iPhone’s thickness and weight, the difference isn’t that bad. The weight is almost a good thing as it makes the phone feel more substantial.

Users who wear tight pants or skinny jeans will notice the thickness as it will make the iPhone hard to slip into a pocket. Other users likely won’t care much about the added size. 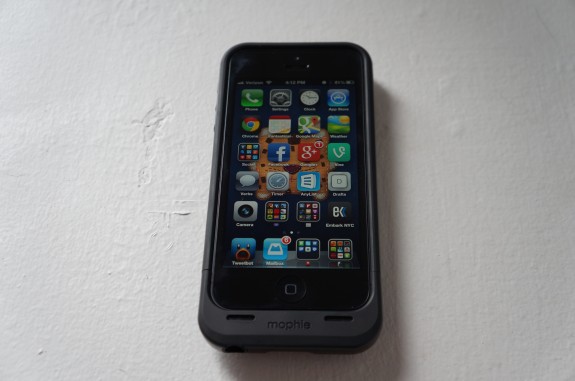 The Juice Pack Air uses a matte finish on the back of the device and a metal band around the sides. There are no button cut outs, but there are buttons on the metal band to replace those buttons. The replacement buttons feel nicer than reaching into a deep hole just to press the power or volume buttons.

In my testing the Mophie Juice Pack Air was able to bring an iPhone 5 from empty up to 75 percent battery in about one hour and 20 minutes. During that time Push was still enabled, and a number of emails came in through the Mailbox app, but the phone was used minimally.

In another test, the Juice Pack Air powered the iPhone 5 from 5 percent up to 60 percent in just over and hour of constant use. During that time I read through Twitter in Tweetbot, streamed a few videos on YouTube and played one nine-hole round of Super Stickman Golf 2. 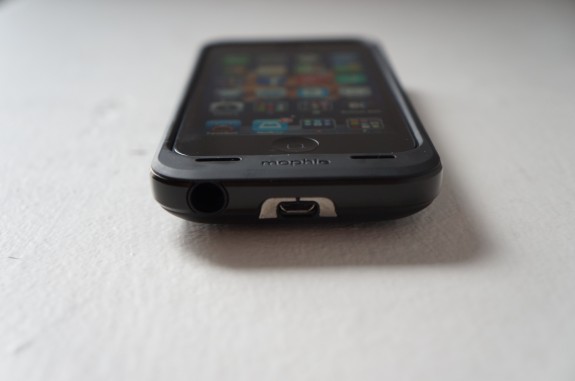 For $99.95, the Mophie Juice Pack Air for iPhone 5 is one of the best iPhone battery cases available. It lasts longer than Mophie’s Juice Pack Helium, and feels a lot nicer in the hand.