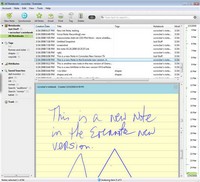 The InkShow review of EverNote that I posted yesterday is getting quite a bit of attention (I hope you watch it. This software is a real game changer.) and I’ll be blogging much more on this soon. A couple of things to quickly update on though.