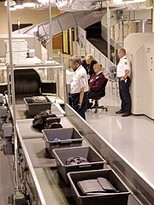 James Kendrick is right. We knew it was only a matter of time. After news of exploding laptops from Dell and Apple with the focus on batteries, you just knew that sooner or later the FAA was going to start investigating. Really, they have no choice. JK links to a Wall Street Journal article (subscription required) pointing out the FAA’s concern. While the FAA may (or may not) issue some sort of sweeping ban, the fault here lies squarely at the feet of the manufacturers. Not only for the problems that led to the issue, but for the woefully insufficient PR response to the problem. IMHO, the manufacturers and their short-sighted weak PR attempts potentially are doing great harm to their markets long term.

Getting practical here for a moment, with the possibility of electronic devices being used as a component in some sort of terrorist incident added to the potential of a fire caused by badly manufactured batteries, and news of individuals suspiciously purchasing cell phones in bulk, what other choice would a political agency like the FAA or other other branch of law enforcement have? This will be news worth following on as many fronts as there are devices with lithium-ion batteries.