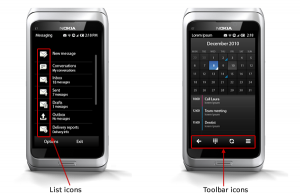 After early screenshots of the Symbian^3 Belle firmware shown on the Nokia E7 had leaked last week, we’re hearing more information about the software update that could propel Symbian forward with a more modern look and feel to make it more competitive with other touch-friendly operating systems, like iOS and Android.

It turns out, according to one tipster to My Nokia Blog who wished to remain anonymous, the OS update is expected to arrive in about five months time, perhaps at Nokia World 2011 in October. Nokia still has not set a date for the conference yet, but it seems like a likely destination to launch the update. In the interim, Anna, which is the OS update to Sybian^3 that precedes Belle, will be coming next month in June. In recent weeks, we’ve seen Symbian^3 Anna, also known as PR 2.0, being shown off on the Nokia N8 and Nokia E7 hardware.

Regarding the earlier rumors surrounding re-sizable widgets, unfortunately that won’t be coming to Belle. Rather, on Belle, widgets will come in different sizes to occupy different amounts of screen real estate.

However, a very welcomed change is that it looks like we finally have confirmation from that tipster, who was privy to testing out an early build of Belle, that the soft keys at the bottom are gone in favor of touch controls.

Soft keys had marked the early transition, in my opinion, of touchscreen user interface from the feature phone to the smartphone. At the time, device makers wanted to replicate some of the menus and navigations provided by the two hardware buttons just below the display on feature phones, and those buttons evolved to provide additional menu settings as soft keys when their functionality was built into the touchscreen. Since the release of iOS and Android, the touch experience has shifted to using touch controls, similar to Windows 7 and Office with the Ribbons UI, where a GUI element is used, rather than a text-based menu structure, and icons display all the functions available to the user at a glance instead of having the user dig through menus.

Other changes to Belle include tabbed browsing in the browser as well as applications that appear in a list. In the current version of Symbian^3, hitting the menu button takes you into a Menu list first where you’ll find some system apps, like the browser and settings, and then users can click on applications to be taken into the applications list. It looks like on Belle, that will be streamlined, similar to hitting the app drawer on Android.