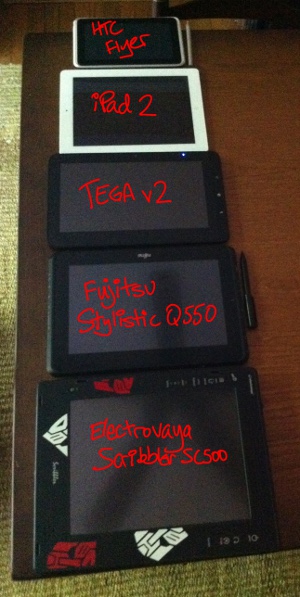 Last week, between packing up the HTC Flyer for return and unwrapping a Fujitsu Stylistic Q550 for review, I found myself in tablet heaven with five – FIVE – slates at my fingertips. How could I not share the marvelous sight with you?

At the bottom, ordered by size, is the darling of my collection, my baby, the once-mighty Electrovaya Scribbler SC500. While not a powerhouse in processing, it featured a 140Whr battery that could run Windows XP for up to 12 hours, though usually 8-10. The battery has long died, but it still runs on AC (at last check). This first generation Tablet PC is what started it all for me in the realm of tablet computing and pen input. My ink blog, Sumocat’s Scribbles, partially derives its name from it.

In the middle, a gift from our friend Hugo Ortega as part of the worldwide launch of his TEGA v2. It delivers surprisingly nimble performance, and I’m very pleased with some of the choices Hugo has made with it, such as the button assignments. Despite that, I can’t really get into it due to its touch-only display. Nothing to do with the tablet; I’m just practically dysfunctional without active pen input. I use it primarily to test touch-specific software and interfaces.

Not much I need to explain about the iPad 2 except specify that this one belongs to my wife. Oh, I use it every now and then, and having an always-on tablet at hand is definitely convenient. Given that I’m on my iPhone all the time, I thought I’d be itching to use the iPad more, but that hasn’t happened. As with the TEGA, touch-only tablets do not particularly appeal to me. My favorite thing about it is that it finally got my wife using a tablet.

The 7″ Flyer is at the top. Think I covered this one pretty thoroughly already.

And finally the new kid. This one arrived for evaluation while I was in San Antonio. Between that delay, catching up with the regular work I missed, and wrapping up my review of the Flyer, I’ve only recently started getting into it.

I have to say I like the physical feel of this slate more than any other I’ve used. The rubberized finish on the back and matte on the screen give it a subtle texture for gripping and writing. The sealed, fanless design allows it to be ultra-thin. However, without active heat dissipation, it has to be very stringent about its processor heat, which results in a performance compromise that other reviewers have already noted. My experience with vented and unvented slates will be put to good use when I cover that in deeper detail later. 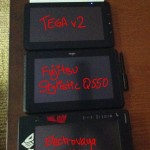 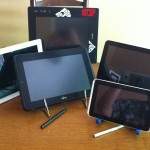 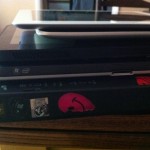 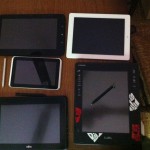 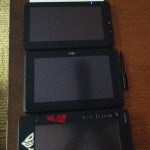 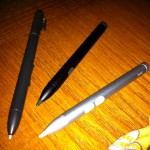 In the obligatory stacked shot, you can see why I don’t sympathize much with the crying over today’s tablets being so “heavy”. I used to carry that inch-thick, five-pound slab at the bottom everywhere, and then I switched to a thicker, heavier convertible. All these other slates feel like frisbees by comparison. 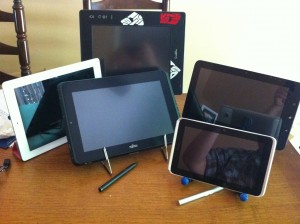 Of the photos I took, I think this one of the slates on stands most demonstrates my tablet geek cred. Any tech reviewer nowadays could get their hands on multiple slates, but how many can prop them all up using stands they already have? (Granted, the Flyer is on a GorillaPod, but I think that counts since I normally use it as a stand.)

I also included a shot of the T900 Wacom pen next to the N-Trig pens from the Flyer and Q550. The N-Trig pens are of slightly different design (Q550 pen has one side button and hole for a tether at the back end), but are otherwise interoperable.

Not pictured with these slates are my convertibles, two Toshibas (Satellite R25 and Tecra M7) and my Fujitsu Lifebook T900. The T900 remains my primary tablet, while the Toshibas are in semi-active use. My wife uses the R25 (as a laptop – ugh), and the M7 is my backup. Yeah, I have a lot of tablets (and I love it).