The Supremacy Mode reveal came this morning in a post on the Star Wars Battlefront blogs. As described, the multiplayer experience featuring iconic characters from the Star Wars film franchise sounds a lot like the Capture The Flag Modes from other multiplayer games. Star Wars Battlefront doesn’t do anything small and Supremacy Mode is no exception. Caches of troops, weapons, vehicles and legendary characters are scattered throughout the levels. It’s the team’s job to control as many of the points as possible and survive what ever the opposing team of players can throw at them. 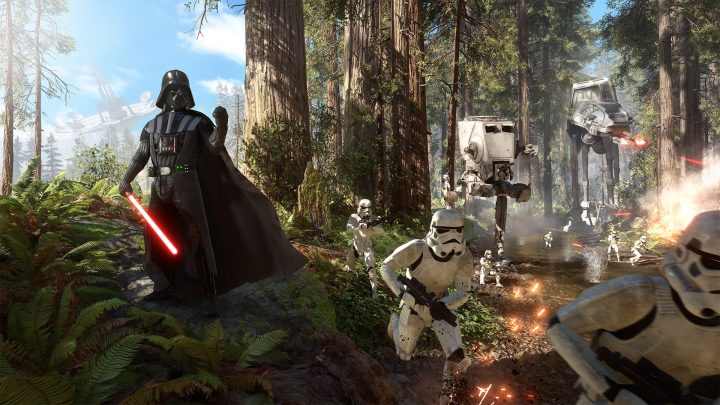 Each session in the newly revealed Star Wars Battlefront multiplayer mode lasts for 10 minutes altogether. Teams are to try and grab control of as may different points as possible – each level has five different areas that need to be controlled. Because the place that players start is a controllable point in its own right, Dice designers believe that Supremacy Mode will offer some fun experiences almost immediately.

To help control the waves of enemies all trying to overrun a given control point, DICE has spared no vehicle that is already available in other Star Wars Battlefront modes. Overhead X-Wings and other ships will fly around, ready to destroy any ground forces that stand an their way. TIE Fighters will do the same.

On Star Wars Battlefront release date gamers will find some pretty large sandbox worlds to play in. DICE says those offered in Supremacy Mode are the biggest. Guarding an area that players need to capture is Darth Vader, for example. Luke Skywalker and Boba Fett also fill this, letting users play alongside their favorite characters. The forest planet of Endor is confirmed in today’s details as being part of the game.

GottaBeMobile was able to get some hands-on time with Star Wars Battlefront during this year’s Electronic Entertainment Expo. The mode we played through focused purely on ground combat and playing together with friends to take on ever-increasing waves of enemies. The game had terrific controls and looked just as good as the trailers and video Electronic Arts and DICE have shared already. The good look graphics go a step further than most shooters too. There are third-person and first-person cameras for Star Wars Battlefront players. Users can switch between the two whenever they want. It’s a trick very similar to what video game developer Rockstar edited for the Xbox One, PS4 and PC versions of Grand Theft Auto 5.

In all of the games different modes players take on the role of a soldier in the Galactic Empire or the Rebel Alliance. A lot of what’s been shown off centers on the multiplayer modes that users need to team up for over Origin, Xbox Live and the PlayStation Network. That being said, there’s single-player missions coming too for users who want that.

Star Wars Battlefront comes in standard version and in an enhanced deluxe edition. Pre-orders are already available at GameStop for $69.99 and $59.99. Users who pre-order the game before launch get access to the Battle of Jakku coming in December 8th absolutely free.