With the Windows 10 release date approaching, Microsoft is quickly adding features and upgrades to the apps and services that’ll power the operating system and give users a reason to upgrade. This week the company unleashed a newly updated Xbox app for Windows 10, packing new features for adding PC games, an upgraded design and the return of one of Xbox Live’s most-beloved features: Avatars.

Microsoft announced new additions to the Xbox on Windows app yesterday on its Xbox Wire blog. When the Windows 10 release date arrives later this month, every Windows PC that upgrades or comes with the operating system will be treated like an Xbox console. Fable Legends and Gigantic will act as launch window games for the new platform and Windows 10 users will be able to plug in a controller and play alongside and against other members of the Xbox ecosystem over Xbox Live. 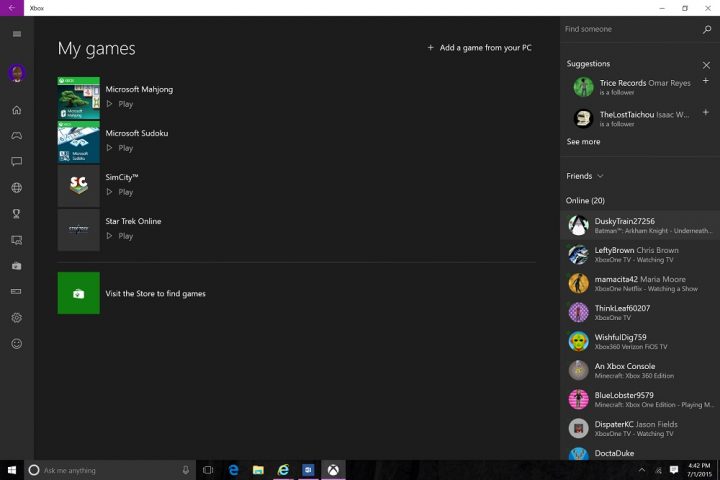 The Xbox on Windows 10 app updates includes some must-have features. Account creation is now something that Windows 10 users can do directly from the app itself. Previously, the only way to sign up for an Xbox Live account was to sign up on Microsoft’s Xbox.com website. To be clear, signing up for a new account in the Windows 10 app isn’t a requirement for all users. Those who have an Xbox account attached to their Microsoft Account are already in the clear.

On Windows 10 release day users will want an Xbox Live account because of all the benefits it provides to PC gamers. Starting with this upgrade PC games can share achievements and milestones in their Xbox Live enabled games with the rest of Xbox Live. That’s something that users can already do with Microsoft’s Xbox One. Screenshots and clips taken on the Xbox One itself can now be shared through Xbox on Windows 10 too.

Microsoft added Game Hubs to the Xbox One at the beginning of this year. They are sort of like Facebook pages in that they provide a single place to get messages and information about a specific game. Xbox on Windows 10 adds hubs for PC games downloaded through the Windows Store. Users can launch a game on their Xbox One for streaming directly from their Windows 10 device. Microsoft added game streaming to the app ahead of the Windows 10 release date a few weeks ago.

The Windows 10 release date for PCs and tablets is scheduled for July 29th. Microsoft is already sending notifications to users, inviting them to reserve their copy of the software update now so that their upgrade process is as completely seamless as possible. The Windows 10 upgrade will be completely free for anyone already running Microsoft’s Windows 8 and Windows 7 operating systems for the first year.

With Windows 10, Microsoft is trying to right wrongs, but still keep Windows 10 moving in the right direction. The much hated Start Screen from Windows 8 is back in Windows 10, but notebook and desktop users will never have to see it if they don’t want to. Without a touchscreen users will see a new Start Menu that looks very similar to what’s available in Windows 7 and third-party apps for Windows 10.

Windows Store apps run in Windows be default, just like classic programs used to. That means mouse and keyboard users aren’t stuck with fullscreen apps that might not support Snap multitasking. Xbox Live, Xbox Music and Xbox Video are all built into the operating system, with the new Windows Store offering downloads of apps, games, movies and music.

Microsoft also dated the Windows 10 Avatars app it released a few months ago. Besides a new Xbox Avatars name, the app has a new design. Microsoft plans to feature Avatars heavily in its Windows 10 for Xbox One update.