Typically, video game releases are met with a lot of fanfare and the hum of machines all downloading the latest game updates and patches. That’s not all that’s happening with the Mortal Kombat X release this week though. A screenshot showing add-ons for Mortal Kombat X is attracting a lot of negative reactions online and threatening to ignite a backlash over how video game developers make even more money off those who purchase their titles.

Mortal Kombat X arrived on store shelves this morning for $59.99. Along with those physical copies of the game, both Microsoft and Sony began letting users play the digital versions they’d already purchased and downloaded ahead of Mortal Kombat X release day. Enabling those digital downloads also meant making a full list of game add-ons available to players and that’s what’s getting the game into trouble this morning. 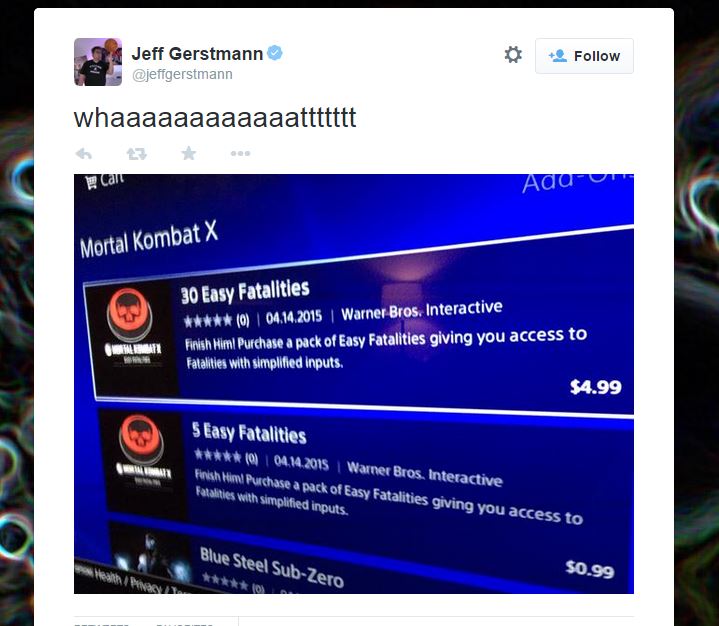 Read: Mortal Kombat X: 3 Things to Know Ahead of Release

Both Xbox One and PS4 users can now download Goro, Blue Steel Sub-Zero a special Samurai Pack, and the new Kombat Pack, which adds even more new fighters. There’s also an option for spending real-world money on something called Easy Fatalities. Fatalities allow the players to execute other players swiftly and brutally. They’ve become a hallmark of the franchise, a way for skilled players to declare victory and showcase their talent. In short, they’re exactly the thing you don’t necessarily want to make easy for new players for free.

Mortal Kombat X players who purchase the Easy Fatalities pack will get simpler controls for Fatalities, allowing them to pull off the tricks without necessarily mastering the same controls that skilled players have mastered in the past. What’s more, those who don’t wish to pay for Easy Fatalities still get the older button layout.

Making the Easy Fatalities Pack even more controversial is their one-use nature. The pack isn’t a permanent add-on, but a consumable. They only come in packs of $.99 for 5 and $4.99 packs for 30. It’s almost as if Warner Brothers, the game’s publisher, is setting up a system where they know casual players are going to be more likely to keep paying for Easy Fatality packs rather than learning them outright. Theoretically, those reliant on the Easy Fatality pack will keep paying for the privilege. The controversy is compounded by the traditional Mortal Kombat fan base.

Video game lovers have taken to social network Twitter to voice their concerns about the Easy Fatalities packs.

One Twitter user accurately points out that fears over downloadable content in the past have come to fruition. “REMEMBER HOW EVERYONE SAID “don’t worry DLC will sort itself out and everything will be better,” he notes. Originally, most gamers were opposed to the idea of downloadable content. They assumed that video game makers would pray on casual users and use them to boost the profits from theirs. For games that are free, paid downloadable content and extras make sense, there needs to be a way for developers to recoup their costs and make money. For console games that already cost $60, paid upgrades are less clear-cut.

Mortal Kombat X is out today for the Xbox One and PS4. Earlier this year NetherRealm Studios and Warner Brothers confirmed that the Xbox 360 and PS3 versions of Mortal Kombat X were delayed. Now they’re scheduled to arrive sometime within the second or third quarter of 2015.

Besides those versions available for consoles, Mortal Kombat X is also marking a big expansion for the series in terms of mobile games, where schemes like the Easy Fatalities Packs are more acceptable and widespread. The game launched on iOS yesterday. There’s an Android version on the way too.