A good keyboard case for the iPad can make users more productive when they’re away from their home or laptop computer. Unfortunately, most iPad Air keyboard cases add so much bulk and weight that they’re too cumbersome to carry around between typing sessions. That’s why we like the Moshi VersaKeyboard. 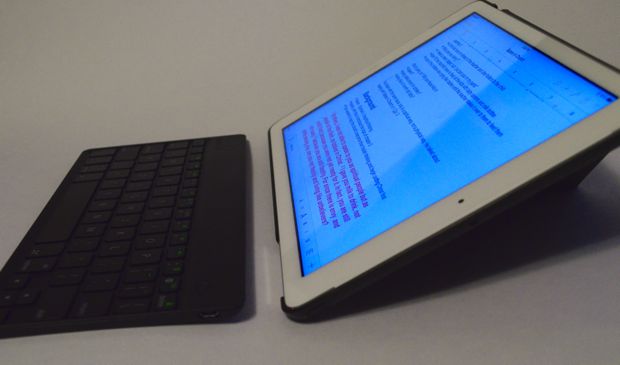 The Moshi VersaKeyboard Case uses the same origami-style folds to prop up the iPad at various viewing angles.

The VersaKeyboard Case comes with the same front cover that Moshi puts on their excellent VersaCover. The VersaCover remains one of our favorite iPad cases. The origami style folds on the cover let the user set up their iPad in a few angles while keeping it incredibly thin and very light (see the image above). The plastic back on the VersaCover keeps the case light and thin. Moshi replaces that back with a housing that holds their Bluetooth keyboard. 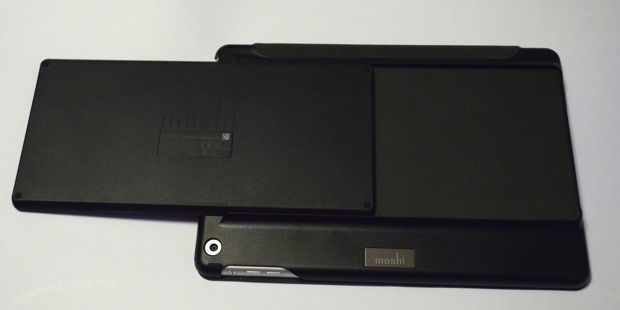 See how it easily slides out of the back of the Moshi VersaKeyboard Case.

The back that holds keyboard adds thickness, but far less than any of the other iPad keyboard cases we’ve seen. The small keyboard slides out of the back (see above) so the user can put it on the table or desk in front of the case (see first image above). The keyboard quickly connects to the iPad Air via Bluetooth. It runs on battery power. We assume the battery will run out faster than larger or thicker keyboards, but we’re still using it with the first charge after about a week of light use.

Like every other iPad keyboard cover, the keyboard’s narrow size will get in the way of fast touch typing. Instead of looking at the screen most of the time, I had to look down and find the keys crammed together on the narrow keyboard. Until Apple makes a bigger iPad, we don’t expect anyone to fix this problem with keyboards built into iPad cases. However, some do a better job than others and we’d put the Moshi in that category. We wish it included backlit keys, but we get all the expected shortcut keys other iPad keyboards include. 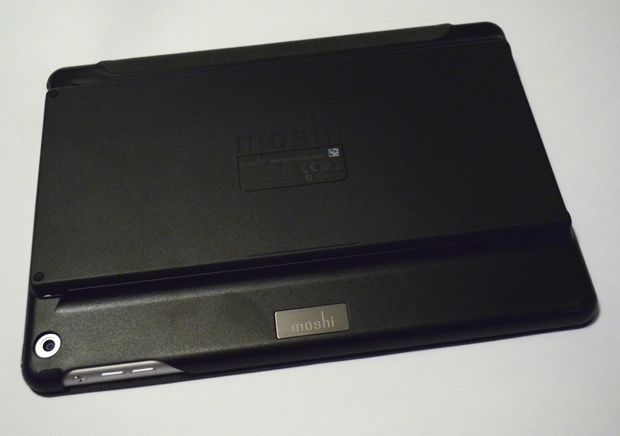 The keyboard slides into the back of the Moshi VersaKeyboard cover making it ready any time.

People who love super thin and light iPad cases, like the Moshi VersaCover, will not enjoy the VersaKeyboard. It doubles the iPad Air’s thickness and makes it noticeably heavy. When compared to ordinary cases, it feels thick and heavy. Compared to other keyboard cases, it’s very thin and light. So we recommend the $100 Moshi VersaKeyboard to anyone who must use a keyboard case and hates how thick and heavy most of them feel.