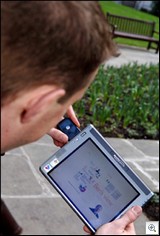 Turning acclerometers in Tablet PCs into a tool for access, the BT Balance System, is designed to help people with disabilities, the elderly, or anyone who has difficulty using a keyboard access a computer.

According to a BT researcher the want to make using the device as simple as using an Etch-A-Sketch. Others are saying it resembles using a Nintendo Wii remote. At the moment it is still a research project.

I’ve always felt the accelerometers that are designed into some Tablet PCs were an innovation just waiting for a real usage scenario to be developed. Perhaps this is it.