The Moto 360 is without a doubt the most exciting smartwatch of 2014, and after spending a day using the Moto 360 it certainly feels like Motorola made the right choice when they chose a circular display, premium leather band and a focus on creating a new watch experience.

Like recent devices from LG and Samsung the Moto 360 runs Android Wear, a special version of Android designed for smartwatches and other wearables. You can run apps on the watch, see your notifications and access Google Now with your voice. 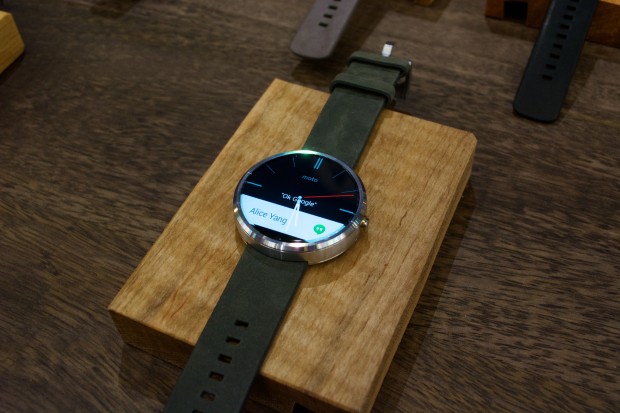 Our Moto 360 hands on includes a day of use while traveling, allowing us to check out the new features.

I used the Moto 360 to communicate with coworkers on Google Hangouts, check my flight heading home from the Motorola Event and to keep up to date on a variety of other items in Google Now during the previous day and it certainly feels like a smarter notification system than I’ve used previously.

Watch our Moto 360 hands on video to see what this exciting new circular smartwatch can do and when you can buy a Moto 360 of your own.

When you raise your hand towards your face the Moto 360 wakes up, showing you the time and if there is a notification a small preview. The automatic on gesture worked about 95% of the time for me. It’s not clear if I need to adjust the speed of looking at my wrist or if this is early software.

One great part about the gesture setting is that it did not activate while I was driving home from the airport. The Samsung Galaxy Gear and Gear Fit both lit up while I was driving, mistaking any hand movement for a gesture and blinding me with a bright distracting light during any night driving.

The Moto 360 display looks stunning, and the circular design definitely draws attention when the crisp display lights up. It even drew a “Wow!”, from my wife — a first for any wearable device I’ve reviewed. I’m still exploring everything the Moto 360 can do, but so far the Google Now access and notifications are handy. I can see myself using Google Now more since I don’t need to take my phone out of my pocket and hunt for the right button. 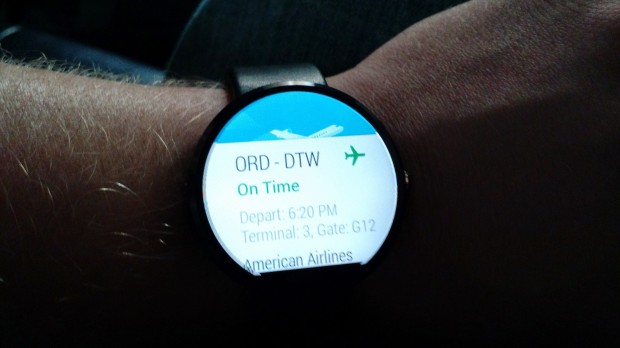 I quickly turned off Gmail notifications as my inbox is too full of spam and the volume of emails makes any kind of notification system a recipe for disaster. I’ll be installing a few apps like the AllTheCooks app which lets me follow a recipe from my wrist in the coming days.

The Moto 360 battery life is rated at one day, and after using it pretty heavily for 11 hours the device still reported 58% battery life so a day of real world sounds just right. The included wireless charger is easy to use and since there are no sleep tracking features built-in you’ll be taking this off at night anyway. The only problem with this battery life is even an overnight trip will require yet another charger in your bag.

Overall this feels like a premium wearable device at an affordable price. The stainless steel ring and leather band really do deliver a wearable experience all its own. The closest I’ve seen in design and style is the Pebble Steel, but the appeal of Android Wear and a beautiful color screen give the Moto 360 an edge.