The new Moto E 2 is a $150 Android smartphone that runs Android 5.0 Lollipop, offers fast 4G LTE connectivity and access to the apps and features that smartphone users need without a contract to drop the price to that level.

With the Moto E 2015 release Motorola delivered key improvements over the original Moto E that combine to offer a greater value for the user. The Moto E 2nd generation has no business selling for [easyazon_link asin=”B00TFAVFL4″ locale=”US” new_window=”default” nofollow=”default” tag=”gbm-ea-20″ add_to_cart=”default” cloaking=”default” localization=”default” popups=”default”]only $150[/easyazon_link], even with the few corners that Motorola cut to keep the price low. 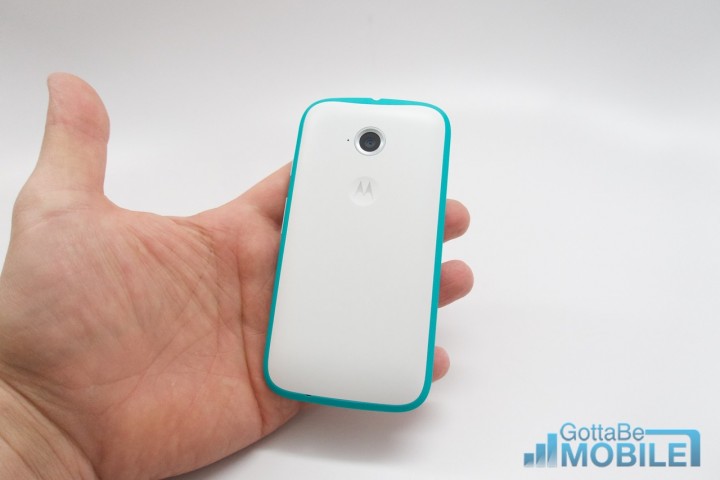 Read our Motorola E 2 review to find out if this $150 off contract smartphone is the right Android phone for you to buy.

Watch the four-minute Moto E 2 video above to get a better idea what this phone offers users at an affordable price. You’ll get a look at the hardware, software, design and storage options and see one area it even offers more expandability than the Galaxy S6 and iPhone 6.

What We Don’t Like: No Camera Flash, Speakers aren’t Great, Some Performance Stutters, Low Resolution Screen.

Bottom Line: The Moto E 2 is a solid phone for the price, but users will need to make some sacrifices compared to more expensive options.

The Moto E 2 display is the biggest let down of the device with a low 960 x 540 resolution that it hard to ignore. On a $150 phone it is a sacrifice that we can understand, but we wish Motorola would ave pushed for at least a 1,280 x 720 resolution.

The Moto E 2 display isn’t stellar, but it is a sacrifice you need to make at this price.

Motorola bumped up the size of the display to 4.5-inches so there is a bigger canvas to watch movies, browse the web, use apps and communicate on. The screen is bright enough for use indoors and out, but the viewing angles are lower than on many other phones. This means you need to look at the display head on, instead of from a side to get a good look at the screen. This makes sharing a YouTube video with another person challenging.

The Mot0 E 2015 features a plastic design, but like with other plastic Motorola devices released in the last year there isn’t a cheap plastic feel to it. The phone has a nice solid feel with enough weight to feel substantial, but not so much that the phone is heavy to hold while watching a video or using it for long periods. 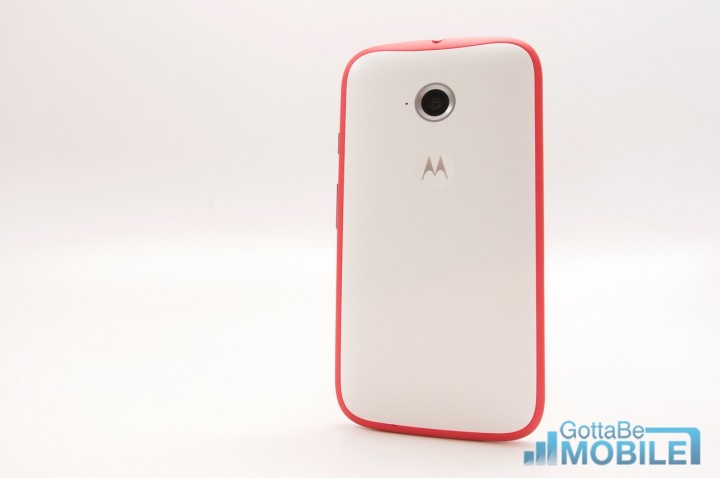 Motorola does a good job of delivering a design that feels more substantial than a phone in this price range should.

The band also allows users to change the color of the device. Slide on additional bands in a new color to add a little customization to this budget device. It is easy to remove a band, but they will not fall off during normal use. The band features raised grip areas so it is easier to hold the phone.

The red band comes off to let users choose a new color and access SIM and Micro SD cards.

Overall the shape of the phone sticks with the curved back that we’ve seen on other Motorola devices and while it is significantly thicker than the Galaxy S6 or iPhone 6, it is reasonable. There is no option to replace the 2,390mAh battery.

Motorola skimped on the cameras. The 5MP rear camera delivers nice looking photos outdoors in great light, but when you are indoors even well-lit areas aren’t enough to deliver amazing looking still photos. There is no flash so you cannot add to the light in the room and this also means you cannot use the phone as a flashlight. 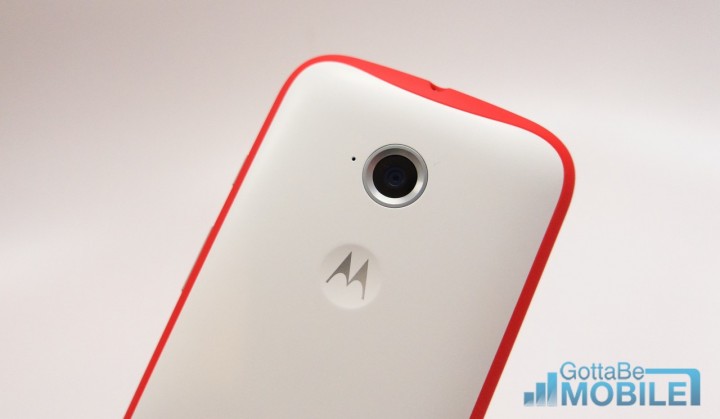 The Moto E 2015 cameras are acceptable, but we really miss a flash.

The camera records 720P video at 30 frames per second which is below the 1080P and 4K resolutions that flagship phones offer. The front facing camera takes OK selfies and delivers a good video call experience, even in mediocre lighting.

The Moto E2 camera app is similar to other Motorola devices with a tap to focus option and a default tap to capture option. There are not a lot of settings to choose from, but you can activate the camera with a quick shake of your wrist. Check out the Moto E 2 photo samples below to see how it performs.

The Moto E 2015 features a quad-core processor and 1GB of RAM which is enough to deliver good performance most of the time. It is not as fast as other flagship phones, but it is fast enough for the price.

After weeks of use there are still pain points where the phone lags. This happens when switching apps or opening an app for the first time. This isn’t something that happens every time you perform these activities, but often enough to be annoying when you are in a rush.

The single front facing speaker delivers music at a decent volume, but it’s not the greatest quality. Definitely carry a pair of headphones with you so you can rock out at full volume.

Call quality is good on this budget smartphone. The Moto E 2 review unit we are using connects to T-Mobile, which did cause a few call quality issues in some cities, but this is what you’ll see with any phone on T-Mobile in these areas.

The surprise about this $150 smartphone is that it runs Android 5.0 Lollipop. That’s the latest software that HTC and Samsung are still trying to roll out to the Galaxy S5 and HTC One.

Motorola adds in several handy apps and services, but for the most part this is very close to the software that you’ll find on a Nexus device.

One feature that we love is Moto Display. When you get a notification it shows the app icon on-screen and you can tap to see a snippet of additional information. This is the best mobile notification system we’ve used and it’s great to see it on a phone in this price range. The Moto E2 also includes special software to quiet the phone when you are sleeping or in a meeting. The video above shows this in action on another Motorola device. The Moto E 2 screen turns on when you pick it up, but it doesn’t light up with a wave like on the Moto X.

Motorola makes some sacrifices with the Moto E 2, but it is still an excellent option for users that want a cheap smartphone without signing up for a contract. This device offers excellent software, smart features and good build quality that you don’t expect in a $150 smartphone. Motorola also sells a $119 version with 3G only.

It is easy enough to adjust to the lower resolution display for this price, but the lack of a flash is tougher to adapt to. This limits the photos you can take and also means you cannot quickly turn the phone into a flashlight, which is incredibly handy.