Last month, Google finally rolled out the often-rumored Android 4.4.3 KitKat update, but then a few weeks later surprised everyone and delivered another update which is now the current and latest available. That is Android 4.4.4 KitKat, and only Nexus devices and a few Motorola smartphones in the US have been updated.

Last week French carrier SFR announced the Moto G would be receiving Android 4.4.4 KitKat in the coming days, and now at least one carrier in the United States is doing the same.

We’ve been hearing reports and rumors for a few weeks that Verizon would be quick to issue updates to Android 4.4.4 KitKat, and Motorola is leading that charge. While all US Moto X, G, and E users are still on 4.4.3 KitKat, the Verizon Moto G started receiving the latest security update this afternoon. 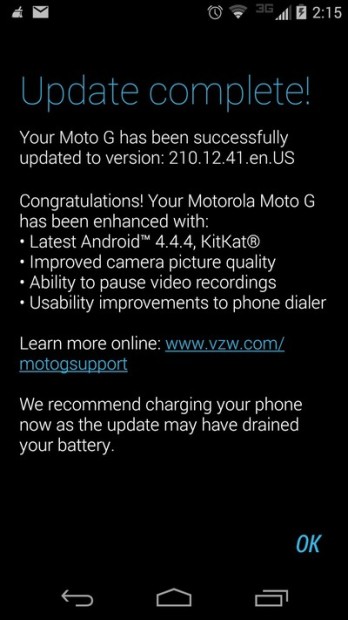 According to multiple sources the Verizon Moto G Android 4.4.4 KitKat update is now rolling out, and hitting handsets as we speak. While we’ve yet to see Android 4.4.4 KitKat arrive for the Moto X in the US, userrs of the Moto G on Verizon will be happy to see this arrive. As we mentioned above it’s mainly a massive and important security fix, but we’re hearing that isn’t all that’s included.

The Verizon Moto G Android 4.4.4 KitKat update improves security, patches some bugs, but will also improve camera performance and quality. Users have started to report that their devices received the update this morning, and we can expect it to continue its rollout all week long.

Like most updates, Motorola and Verizon have yet to formally announce anything, to keep users from getting their hopes up. That being said, now that the Moto G Android 4.4.4 KitKat update is starting to emerge owners can expect it to arrive today, or some time over the course of the next two weeks. Typically users get it within 5-7 days, but it can take up to 14 to arrive to all owners.

When Google released Android 4.4.4 KitKat just weeks after Android 4.4.3 started arriving it messed up the release and update plans for many manufacturers. From Samsung, to HTC, Sony and even Motorola. The DROID Ultra lineup saw long delays and eventually received an update last week, and we can expect more to start rolling out in the next month.

Android 4.4.4 KitKat is Google’s latest official release, which is expected to eventually be replaced by the Android L release sometime this fall. For now though, this is the latest version available and those with a Verizon Moto G can expect to see it sooner rather than later.