Motorola has been busy with a few new smartphones full of customization options, and one in particular is the Moto X. The company offers nearly 18 different colors to choose from, all for free, and previously a Bamboo wood (ok, Grass) option for an additional $100, but today we have good news.

This morning Motorola announced that making the back of the Moto X wood has finally be streamlined into a process they’re confident in, and will be offering real wood backs in four flavors starting January 21st, and it’ll only be $25. Lowering the customization feature that makes your phone one of a kind down from the $100 price point before hand. 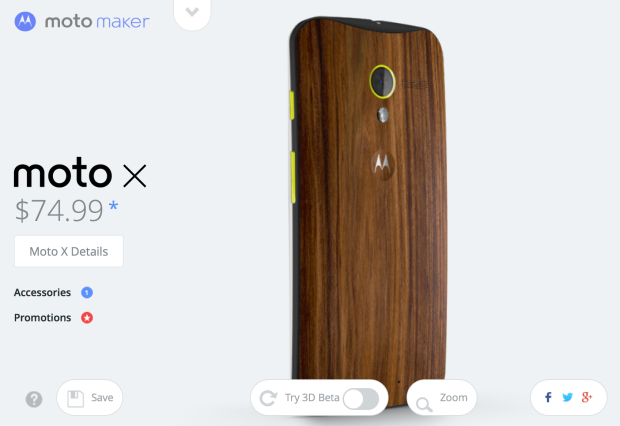 When Motorola announced the Moto X back in August we knew they’d be offering customization, but sadly it was initially only with AT&T. Today though, it’s available from all major US carriers, launching soon in the UK, and now they have three new wood options to choose from.

Initially being delayed for the simple fact that making a phone out of wood isn’t easy, they finally launched a Bamboo wood back option for the Moto X in December. Today though, they’ve announced Walnut, Ebony, and Teak will join the choices starting on the 21st.

Oddly enough the Rosewood finish we’ve been seeing for months leak on Twitter, and shown by Motorola themselves has been replaced with Walnut. Again, all four wood options will be $25 on top of the $99 (with a new contract) price for the Moto X. Giving you a truly custom one of a kind smartphone. And for those who’ve already paid for a Bamboo Moto X for $99, you’ll be getting a $75 coupon code in your email inbox from Motorola.

If you’re interested in a wood Moto X you’ll be able to buy the new options next Tuesday, and stay tuned for our hands-on, as we’ll have one shortly.