The brand new Moto X+1 release date is quickly approaching as the company prepares to announce a myriad of new devices on September 4th. The rumors have continued to pile in over the past few weeks, but today our first official press photos of the new Moto X+1 (or Moto X2) have emerged.

Until today we’ve yet to see any real photos of the Moto X+1, aside from a few questionable images that surfaced a few weeks back. Ones that may actually show the new Moto G2 instead. However, the famed and popular leakster @evleaks, who recently retired, is back for one last leak and has just revealed the Moto X+1 weeks ahead of the release date.

The original Moto X leaked on video months and months ahead of the release, and it was clear this year Motorola put a lot of effort into keeping its devices for 2014 a secret. This year Motorola has done a rather excellent job keeping the leaks to a minimum, but with only a few weeks left we now have a clear picture of what the Moto X+1 will look like.

Pictured above is the new Moto X+1 which will be announced and unveiled in Chicago on September 4th by Motorola. We’re hearing a release date will quickly follow, but more on that below.

Both the stock model, and the customizable option via the MotoMaker.com website are shown here, which are both Verizon versions of the handset. We’re assuming the new Moto X+1 will be available on all major carriers, just like its predecessor, but this could be a sign that Verizon will have an initial exclusive rather than AT&T like last year.

The new renders confirm earlier reports, as well as leaks that surfaced last week showing what appeared to be the front panel of the new Moto X+1 next to the original Moto X from 2013.

There are no details along with the leak, like a confirmation on the name, but we are seeing the full final product for the first time. These are reportedly official press renders of the new smartphone, potentially revealing exactly what we can expect weeks before Motorola takes the stage to show off its new phone.

So what can we expect from the Moto X+1? Clearly there’s a white and black variant like last year, and these are both branded for Verizon Wireless. But there will also be all the customizable colors, accent colors, engravings, wood backs, and possibly even leather options with this new phone. We see a black variant, and a white and bamboo wood option here.

One other important thing to notice is the button on the back. The Motorola logo will reportedly be a button, but we’re not yet sure what for. It could be something special, or just a shortcut for the camera, or customizable as a shortcut button as the user see’s fit. We’ll have to wait and see. The image confirms the 12 megapixel camera on the rear, with the dual LED flash imbedded inside the ring for the camera. Here’s what we’re hearing will complete the Moto X+1 when it gets announced on September 4th.

The specs outlined above aren’t confirmed, and rather come from a few unknown sources and benchmark results. This means that while we’ll likely see something very similar to what’s mentioned above, we can’t be sure until Motorola confirms the details themselves.

Based on the new images revealed today, and the details we’ve heard thus far, the new Moto X+1 is poised to be an excellent option this fall to battle the Galaxy S5, LG G3, and even the HTC One M8 with those front facing speakers and more.

So when will it be released? Reports last week “confirmed from Motorola sources” that the global rollout for the new Moto X+1 and Moto G2 will begin on September 10th. This doesn’t mean that’s when all carriers in the United States will offer the phone, as AT&T had a short exclusive last year, but it’s likely the phone will be available on all major carriers before the end of the month. Other reports suggest the Verizon Moto X+1 won’t arrive until September 25th. 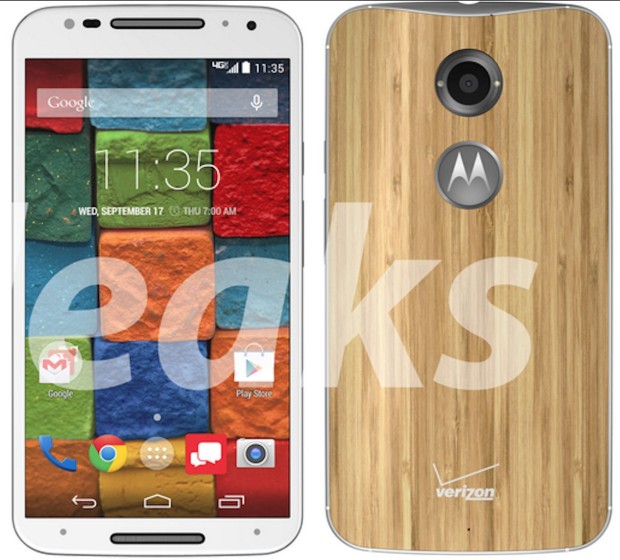 This is the first leak of the Moto X+1 in a final form, and it’s showing Verizon on the back of both. This could mean they’ll get the device first, on the rumored September 25th date, or simply just be one of many carriers in the US and around the globe to offer this stunning new handset. The phone says September 17th right inside the leaked image, so that could potentially be the release date too. We’ll have all the details live from the Motorola event on September 4th, so stay tuned!