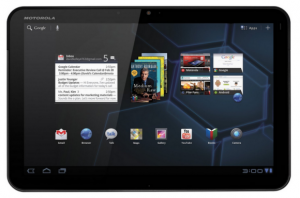 After much speculations and many rumors and leaks, Motorola has finally announced a WiFi-only edition of its Android 3.0 tablet called the Xoom. The company initially launched a 3G-capable model for Verizon Wireless just prior to the Apple iPad 2 launch; that model will be eligible for a 4G upgrade for free in the future, though that process may be a hassle as it requires owners to physically mail in their devices to Motorola for a radio swap to enable LTE support on Verizon’s 4G network.

In its press release, Motorola says, “We are now continuing to expand the choices available to consumers with the MOTOROLA XOOM Wi-Fi to be available soon from numerous leading retailers in the United States.” The Xoom will be available from Amazon.com, Best Buy, Costco, RadioShack, Sam’s Club (select locations), Staples and Walmart for $599.99 on March 27.

The Xoom is powered by a dual-core gigahertz processor from NVIDIA called the Tegra 2, which is also found on the Atrix 4G smartphone on AT&T. The device runs Android 3.0, also called Honeycomb, which is a re-designed version of the Android OS for tablets and promises a better user experience as to not seem like an oversized smartphone thanks to live widgets, panels in select apps, and a high resolution 1280 X 800-pixel on a 10.1-inch display. Additionally, the Xoom will also support Adobe Flash 10.2, which is forthcoming, and that edition of Flash will support hardware acceleration.