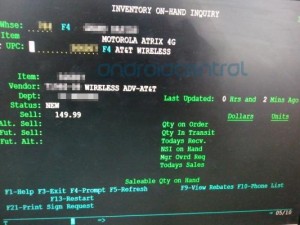 Recent pricing leaks from Amazon.com and Costco warehouses suggest that Motorola’s Tegra 2-powered Atrix 4G smartphone may be priced at $150 on a two-year service agreement through an initial exclusive arrangement with U.S. carrier AT&T. Without a contract, Amazon’s pricing reveals that the device would cost $600.

The 4.3-inch slate with dual-core 1 GHz processor and GPU powered by NVIDIA is among the most powerful smartphones on the market with a display resolution that’s only slightly more narrow than Apple’s iPhone Retina Display to accommodate the 16:9 widescreen aspect ratio; Motorola calls it the qHD display resolution.

With the pricing undercutting the iPhone 4, it seems that AT&T may be getting more aggressive with the Atrix 4G’s pricing as it loses U.S. exclusivity of the iPhone 4 and will have to share Apple’s flagship phone with rival carrier Verizon Wireless. Motorola, too, is aggressive here as it may be getting overshadowed on the ‘Droid’ front on Verizon Wireless as the carrier may be diverting resources away from Android towards the iOS platform.

The Atrix 4G will also have an optional Laptop Dock and Home Dock to increase the utility of the smartphone, either as a business and productivity machine or as a consumer home entertainment system. The phone was announced to much fanfare at CES earlier this year.