We had heard that it was coming soon and sure enough, Motorola has begun to roll out emails to members of the Motorola Atrix 4G Gingerbread Update soak test telling them that the 4.5.91 update will be rolling out to them today, the update that is going to be the one that has Gingerbread on board. 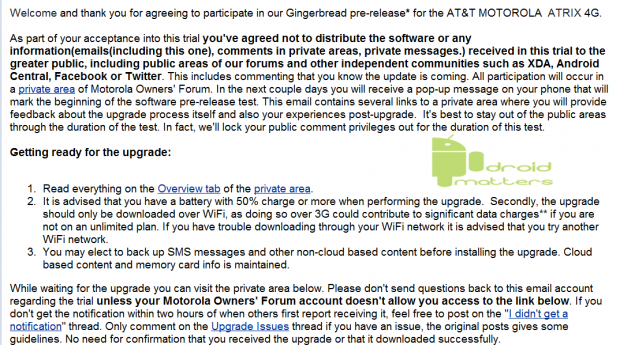 Like all soak tests, if all goes smoothly, the update will then roll out to the masses shortly after the testing concludes. So, if you’re part of that soak test, here is what Motorola is saying:

Supposedly, the update will be rolling out at some point this afternoon. Keep your fingers crossed that we get an unlocked bootloader with the software because that would only mean good things for other Motorola phone owners.

Exciting times for Atrix 4G owners to be sure. Let’s just hope that the update doesn’t start bricking phones like it did with the Motorola Droid X.