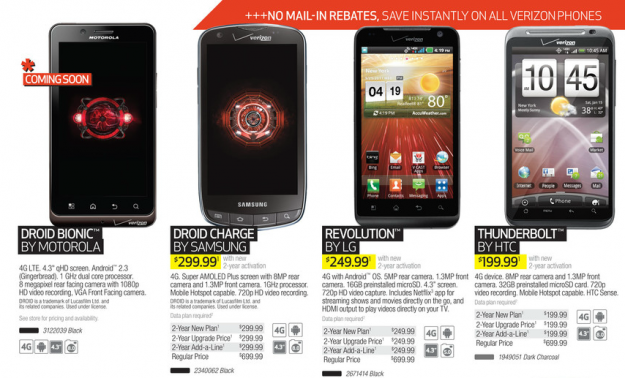 There is no official pricing on the Droid Bionic, but we are expecting a sub-$600 full retail price with the possibility of a $299 two year contract price. This price has made an appearance in several locations now, and while the Best Buy ad doesn’t list a price, the Bionic is furthest to the left, next to the $299 Samsung Charge.

We asked last week if you would still want to purchase the Droid Bionic at $299, and an astonishing 68% of you said that you would pass on the device at $300. It’s not surprising that so many of you don’t want to get the Bionic at this price, considering the iPhone 5 will cost $199 and other competing Android devices aren’t as expensive.

As Adam Mills has pointed out before, Verizon is charging a premium to get on their 4G LTE network. Instead of charging you a monthly fee, the phones are more expensive upfront.