Yesterday, we brought you some exclusive new pictures of the Motorola Droid Bionic which we knew were definitely not the last photos that would leak out prior to its launch in September. Far from it.

Today, another photo has surfaced and this one, instead of giving us a good look at the phone, gives us an idea about how well the Droid Bionic is working with Verizon’s 4G LTE network.

We’re assuming that the speeds you see here are with Verizon’s 4G LTE network and if that’s the case, I think those of you who are waiting on this phone are going to be pretty thrilled. 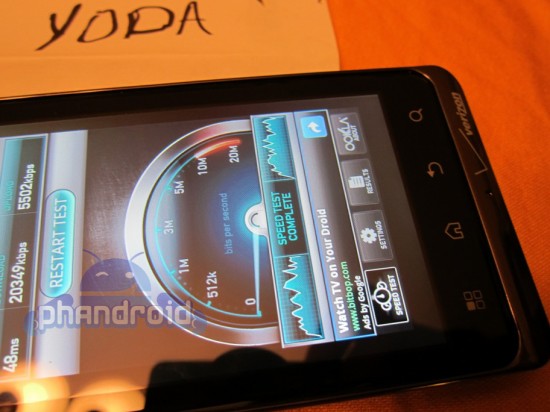 That’s not the big news here though. The big news is that the person who has this phone in their possession is saying that the battery life is fantastic and is better than any other 4G LTE offering on the market. Not saying much but hey, it’ll do. With moderate usage, the Droid Bionic is apparently able to get 15 hours of battery life.

Hopefully, that silences all of you that were moaning about the thickness of the device that showed itself in yesterday’s photos. This thing obviously has a fairly big battery and you know what? I would take a slightly thick phone with awesome battery life over a thin phone that can barely top a couple of hours with moderate use.