Plenty of you thought that the Motorola Droid Bionic was too expensive at $299. In fact, 68% of the almost 4,000 respondent’s said that the price was too high.

The good news is that there appears to be a great deal on the horizon. A leaked ad from Costco shows the Droid Bionic for $299, just like Verizon, but Costco is throwing in a huge helping of extras.

Check out our Motorola Droid Bionic review to see if this deal is right for you. 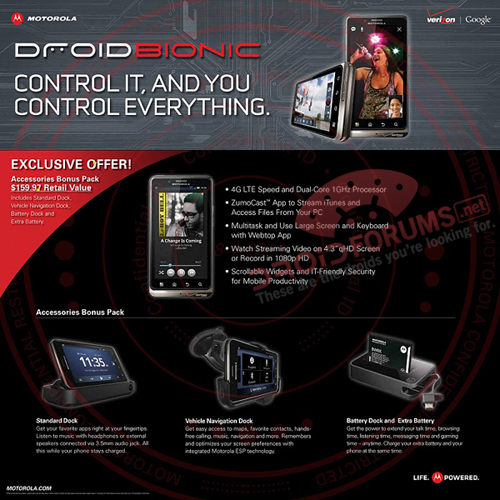 This deal on the Motorola Droid Bionic includes the following extras, a $160 retail value according to the ad.

In order to get this deal, you’ll need to be a Costco Member, which costs $50 a year. With this you get deals like this and you can return your phone for up to 90 days, instead of the typical 30.

Sadly the deal doesn’t include a webtop dock, so it doesn’t look like this dock will let you connect to the big screen and use a keyboard. That said, the print is pretty small, so we could be wrong.

This deal should help ease the pain of picking up Verizon’s latest 4G LTE smartphone when it arrives, perhaps as soon as September 8th.

With the premium Verizon is placing on this the Bionic and 4G LTE devices, this may be one of the best deals you find on the Droid Bionic at launch.

We’ll be keeping our eyes on the other usual suspects like Amazon and Wirefly to find out who can offer the best deal when launch rolls around.

Does this deal change your mind on the Bionic being too expensive?