We’ve been at Motorola’s event in New York City getting our hands dirty with the company’s new products so let’s start with the big announcement, the Motorola Droid RAZR. The Droid RAZR was the device that was rumored to be getting announced today at the event and Moto delivered announcing the 4G LTE smartphone, a device that is going to feature an extremely thin design with a bunch of hefty features.

So let’s start with the features to get you caught up. 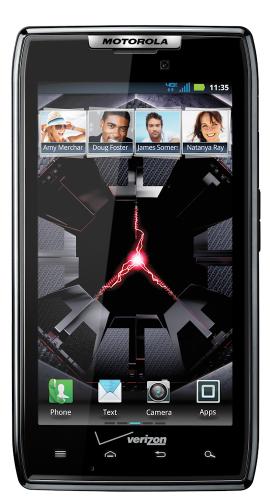 It also has a unique design. It has a stainless steel core, a Kevlar backing and a splash guard screen. Oh, and did we mention that it’s the thinnest 4G LTE smartphone to date? Motorola was even able to squeeze a 1,800 mAh battery in there to ensure that this thing was able to work well on Verizon’s next-gen network.

It supposedly has way more talk time than the Droid Charge or HTC ThunderBolt making it the most appetizing 4G LTE phone to date.

So how does all of this add up?

Our own K.T. Bradford was able to check it out first hand and came away very impressed with Motorola’s new device.

It apparently feels about as light as the Samsung Galaxy S II (spec-wise, it’s lighter). The 4.3-inch display is gorgeous and rich and should put the display on the Droid Bionic to shame.

As for the software, it runs extremely smooth moving between apps and the homescreen and navigating around the app tray is a breeze. MotoBlur, or whatever Motorola is calling the UI on its phones has improved drastically. Seriously, it’s far and away better than anything Motorola has done before with its user interface.

For one thing, it’s less ugly and another, it has more customization. You’re now able to change the apps on the bottom of the homescreen and you can also hide applications in the full app list without deleting them.

Needless to say, we’re looking forward to the Droid RAZR’s arrival which should be sometime around November 10th.