Last week, Verizon assured future Motorola Droid RAZR owners that the device would be shipping out by November 10th. We also saw solid evidence that that would be the day it would be released to all channels. However, it seems that Verizon has had a change of heart as evidence has surfaced suggesting the carrier won’t be launching the Droid RAZR until November 11th, a day later.

An internal screenshot has revealed that Verizon might not be unleashing this bad boy until November 11th. This isn’t set in stone though as the carrier has still failed to announce specifics as far as the launch is concerned.

November 11th is a Friday which would stray from how Verizon normally does launches so we remain skeptical. 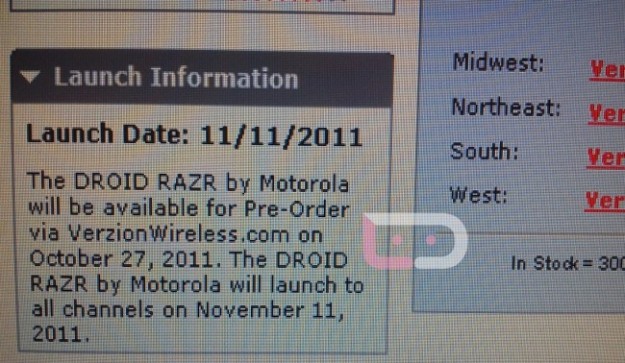 We fully expect Verizon to keep its promise and ship out pre-orders by November 10th so if you’ve already put your order in, no need to fret.

But for those of you that are going to be heading down to your local retailer, this new date is one to keep in mind.