The Motorola Droid RAZR MAXX is one of the best Android smartphones on the market right now and it looks like it might become even more appealing to those looking for a new device.

Droid-Life has acquired an image of what appears to be a flyer from Verizon which clearly states that a $100 price drop is on the way for the Motorola Droid RAZR MAXX. The drop doesn’t look to be a permanent one as the flyer states that it’s a ‘deal’ but even if it is a temporary deal, it will be tempting to many.

That’s because the current price of the Motorola Droid RAZR MAXX is $299 on-contract through Verizon. A $100 price drop would take it down to a much more affordable $199 on-contract. 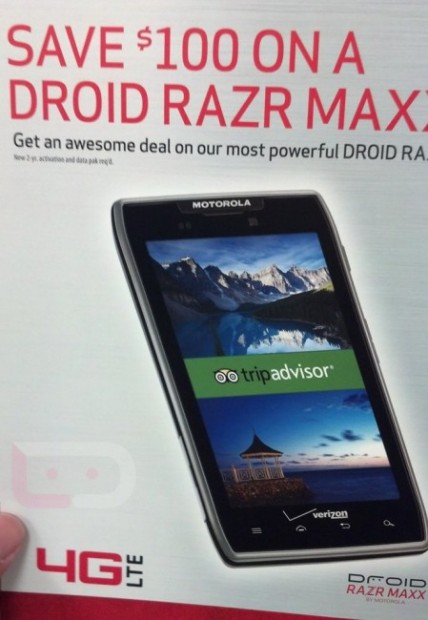 It’s unclear as to when this promotion might start although we get the feeling that it might go down sometime in the near future. That’s because Verizon is gearing up to launch the HTC Droid Incredible 4G LTE in the weeks ahead and it also might have a phone called the Motorola Droid Fighter on tap.

The Droid Fighter is said to be the Motorola Droid RAZR HD which means 720p resolution. There is also talk of the phone possibly having the same 3,300 mAh battery that the Droid RAZR MAXX employs.

The Motorola Droid RAZR MAXX is the best selling Android smartphone on Amazon right now and there is a good reason for that. It features a large screen, a speedy processor and of course, a massive battery, all of which fits into a slim 8.9mm design.

It only stands to get better as Motorola and Verizon have both promised that it will be upgraded to Android 4.0 Ice Cream Sandwich in the future.

No telling when this deal might start but be on the look out.