Instead of the 16 GB micro SDHC card that had shipped with the first generation Motorola Droid X, a device that Verizon Wireless had positioned against the Sprint HTC EVO 4G at the time of launch, the successor, the Motorola Droid X2, will ship with a paltry 2 GB micro SD card according to leaked specs from SCK Kiosks. 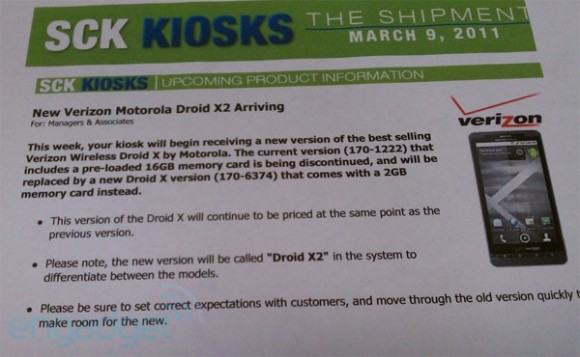 However, despite the reduced memory card size, users who wish to add storage can always replace the 2 GB card for a larger card size, which goes up to 32 GB max. In lieu of the larger bundled storage, Verizon Wireless and Motorola may be including a faster processor than the original’s 1 GHz single-core CPU to a 1.2 GHz single-core chip along with a front-facing video camera.

With the launch delay of the HTC Thunderbolt, which is widely believed to be Verizon Wireless’s first 4G LTE Android smartphone to launch, the Motorola Droid X2, which is shipping to stores this week, may hold customers over while the wait for 4G Android is on. In addition to the 4G Thunderbolt, Verizon also has the Motorola Droid Bionic, which will be similar to the Droid X2, but will offer 4G connectivity for faster mobile broadband access, dual-core CPU from Texas Instruments, and the same 4.3-inch display along with front- and rear-facing cameras.