While Motorola just recently announced its Droid RAZR M through a partnership with Verizon Wireless that will give that device a dual-core ARM-based Snapdragon S4 processor from Qualcomm, the company may release an international variant of the same smartphone called the Motorola RAZR M that will feature modified specs. The biggest change to the international version is that the device will eschew the ARM-based CPU for an Intel Medfield processor. 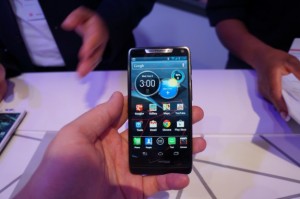 At the beginning of the year, Motorola had committed to a ‘multi-year, multi-device‘ roadmap of devices to feature Intel’s Atom-based processors. It looks like the Motorola RAZR M will be the first product from that partnership.

The launch should be a big win for Intel as the chipset has seen limited release so far in mobile devices.

Company representatives speaking to Pocket-lint say that Motorola may change the name of the smartphone to reflect the change in processor, but the rest of the specs should remain identical to the Verizon-bound model, including a near bezel-less design, qHD screen resolution, and Gorilla Glass display.

That publication is reporting that Motorola UK has sent out invitations for a media event that is occurring on September 18 fpr a device that features an edge-to-edge display, leading many in the industry to speculate that the device in question will be a variant of the Droid RAZR M.