We’ve heard about the leaked pricing for the Droid Bionic (with two-year activation) and accessories bundle at Costco, and now we’re hearing more information about the flagship Motorola Droid device with its innovative Webtop solutions that could be enabled through a variety of Motorola-made accessories. In a leak obtained by Droid-life, it appears that Motorola is re-vamping its website to feature more Webtop accessories for the flagship Verizon Wireless Droid Bionic, rumored to be launching on September 8th.

Most of the accessories we have seen in other forms for other smartphones, such as the HD Station, which is a multimedia desktop dock similar to that offered for the Sprint Photon 4G or the Droid X and Droid X2 but altered for compatibility with the Droid Bionic. There’s also the Motorola LapDock, which is a keyboard laptop dock that turns the smartphone into a netbook, a concept that had debuted on the Motorola Atrix 4G for AT&T earlier this year at CES. New to the list is an inexpensive Adapter for Webtop Application, which will plug into the phone and should give users an even more expensive way to access the Webtop application, though pricing nor availability for all three Webtop accessories were revealed. 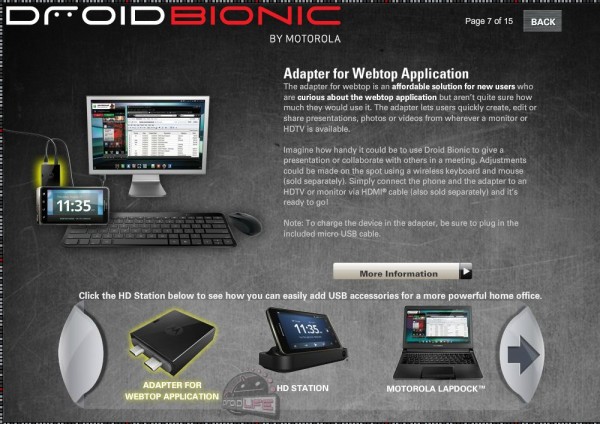 For the adapter itself to be successful, it would have to be priced less than the HD Station Multimedia Dock. Typically, as official docks are priced around $40-$70, the adapter should go for less than that.

Webtop is a special OS that’s preloaded into storage on the phone that’s based on Linux and is accessible when plugged into either the Laptop Dock or an HDTV and stays hidden on the phone. The OS gives users access to not just the phone, but also to a full Mozilla Firefox web browser as well, along with a special UI for displaying videos, photos, and music.