Motorola’s latest patent for a smartwatch shows off a more premium wrist computer with a flexible display. Rather than many swartwatches of today that utilize plastic, rubber, or leather wrist straps, the smartwatch that Motorola may be developing would utilize metal links. Additionally, rather than having a separate watch that’s attached to bands or straps, Motorola is showing off flexible display technologies could be placed on top of the metal links so that as the links curve to wrap around a wearer’s wrist, so does the screen of the watch.

Essentially, with the newly uncovered patent, Motorola is hoping that the display would wrap around a user’s wrist and conform with the metal bands. Each link of the metal band would have a prong that would attach to the display and hold the screen in place. 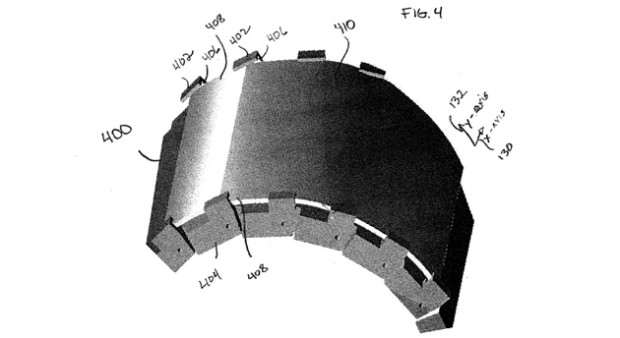 The Motorola smartwatch patent was discovered by Engadget.

It’s an interesting concept that combines a little bit of the old world wearable wristwatch with a new flexible display technology. Likely, Motorola would embed the circuitry and battery inside the metal band itself. To do this, the company would likely have to rely on flexible batteries and circuitry.

This isn’t the first time that we’ve seen a patent for a Motorola smartwatch. A prior patent that was uncovered for the Google-owned company suggests that Motorola would be focusing on health and fitness aspects of the watch.

The wearable computing category is starting to emerge. Sony and Samsung already have smartwatches on the market today while rivals Nokia, Microsoft, Apple, and LG are rumored to be bringing a watch to the market in the future. In the past, Motorola focused its smartwatch concept on fitness with the MOTO ACTV, a product that has now been discontinued.