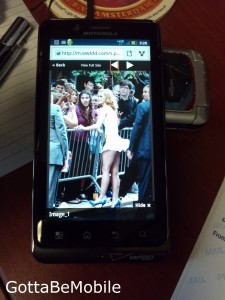 The Motorola Droid Bionic has had a long road to launch. Literally. It was first announced all the way back in January at CES and since then has undergone a design change that Motorola has touted as improved and better than the original. We’ve seen the new Droid Bionic in all of its glory several times lately and whether or not that’s true is up to you to decide.

But just in case you needed some encouragement, Motorola has gone ahead and updated its Droid Bionic letter and is not only touting the enhancements that have been made to it but also mentions that it still expects the phone to arrive in September. They also believe it will be one of the best 4G LTE phones on the market for whatever that is worth.

Here is the letter in its entirety:

Motorola Mobility delivered the original DROID in 2009, an award winning device and one of the most successful smartphones launched. The company followed with the DROID X, DROID 2 Global, and DROID PRO. We believe the DROID BIONIC will have those same award winning features and will be one of the best 4G LTE devices on the market.

Motorola Mobility strives to deliver the best possible user experience with all of its devices. We are working to ensure that the DROID BIONIC meets the expectations of consumers who are awaiting its availability.

In collaboration with Verizon Wireless, we are expecting to launch DROID BIONIC this September. We are very excited about the new enhancements that have been incorporated into our first 4G LTE smartphone since we first announced it at CES, and look forward to revealing more details as we get closer to launch.

My favorite part? The part where Motorola says it is working to meet the expectations of consumers. Hopefully, that means that they have listened to potential buyers and will one, release a phone with fantastic battery life (we have heard that that is the case) and two, unlock the bootloader. I think there is only a slim chance of the latter happening but I have a feeling Moto has done a great job in the battery department.

From what you’ve seen or heard, is this phone going to meet your expectations?