Motorola’s much-rumored X Phone is expected to be available for consumer purchase this summer and at least one leak has it that the device will be available on July 8th on Verizon’s 4G LTE network in the U.S. for the price of just under $300 with a two-year contract. The smartphone has been rumored with a large edge-to-edge display. It’s now said that the X Phone will also have a metal body and Kevlar construction to give it a premium feel.

Previous leaks suggest that the phone may be announced alongside new a new Nexus 5 smartphone and a Nexus 7.7 tablet at this year’s Google I/O developer conference in May. The X Phone would not be a Nexus-branded product but would be heavily influenced by Google as Google now owns Motorola Mobility. The general purpose of the X Phone, according to earlier leaks, is to allow Motorola to more effectively compete in the high-end space across multiple carriers as the successful Droid franchise is locked to Verizon’s network in the U.S. Additionally, a globally branded X Phone would allow Google and Motorola to consolidate marketing money and run the same campaign and get mindshare rather than running separate campaigns like it does now for AT&T’s Atrix line, Sprint’s Photon line, and Verizon’s Droid series. 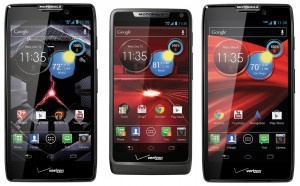 The X Phone sold through Google Play Store will have an unlocked bootloader whereas Verizon’s channel will have locked bootloaders. Additionally, Verizon will unlock the bootloader for a $15 per month charge. That seems a bit high. A one-time charge would be reasonable, but a per-month charge is just insane if the rumors are true. Unlocking the smartphone will allow you to remove the bloatware and make the X Phone more akin to a Nexus experience without any additional software other than the Motorola and Android experiences.

It’s unclear what the unsubsidized price of the phone would be, but considering that the X Phone is positioned as a high-end iPhone and Galaxy S4 challenger, it may cost upwards of $500 or $600 at retail through carrier channels. However, it’s reported that the Google Play Store will sell the X Phone at similar prices to the Nexus phones, which means that the high-end X Phone could cost as little as $300-$350 unlocked and perhaps without a contract requirement.

If the X Phone is priced at or near the Nexus’ price on the Play Store, it really makes no sense to sign a carrier contract to get the X Phone via your local carrier if it costs the same with a contract. Perhaps these rumors are too good to be true?

And the publication is also reporting that all carriers will be offering the X Phone so it will reach a large audience, similar to how Samsung had negotiated the Galaxy S3 on all national carriers in the U.S.