Earlier in the year, Motorola had launched a version of the Motorola Xoom Android tablet with access to a 3G radio that will be upgradable to support Verizon’s 4G LTE network. After some delays, earlier this month, Verizon and Motorola finally made the 4G upgrade available, a process that required Verizon’s Xoom owners to send in their tablets and wait a week or so to get the Xoom back. Now, after servicing existing owners, Motorola and Verizon are ready to sell a 4G LTE Xoom out of the box. 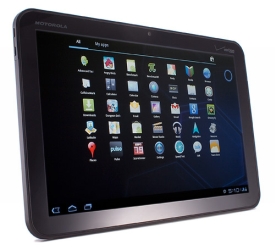 Like the Xoom that launched with a 3G radio earlier this, the hardware remains essentially the same. However, with 4G, owners will have access to much faster upload and download speeds on the LTE network. Verizon claims that its 4G speeds are up to 10 faster than 3G, clocking in at up to 15 Mbps on the download side.

The Xoom is the first tablet that debuted with Android Honeycomb as well as a dual-core Tegra 2 CPU. Since launching the Xoom, Verizon also carries the slimmer Samsung Galaxy Tab 10.1.

The Xoom 4G retails for $600 without a contract or a subsidized price of $500 with a two-year contract.