They say the single most important thing in retail is location. I found some truth to that with the tablets at my local Best Buy last week, highlighted by the abysmal placement of the Motorola Xoom, but contradicted by the in-store tablet usage I saw.

Dealing with one of several hassles last week, I hit my local Best Buy to buy (and later return) a cable modem. Greeting me as I walked in was their tablet display, part of their mobile phone area. The offerings consisted of lesser-known devices and brands, except for the Samsung Galaxy Tab.

I flipped through the Tab for a bit before wandering the phone area looking for the Motorola Xoom. However, the only other tablet I came across was a non-functioning display for the Dell Streak. I wondered if the Xoom was sold out or never in stock at this location. Regardless, I was disappointed that it wasn’t at least on display.

Past this area, at the forefront of the computer section, was the Apple subsection with two iPads on display, black and white. I didn’t bother with a hands-on, but I could tell from the two people using them that they were both functioning. I walked through to the networking area, picked up my modem and left. 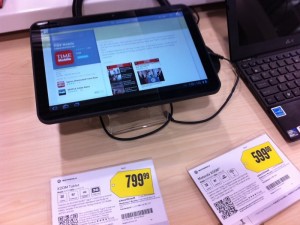 Unfortunately, that modem did not fix my problem, so I returned it two days later (after getting my connection restored with a leased modem). Took only a few minutes to get a full refund, no questions asked. With time to spare, I decided to tour the notebook section, hoping to find a tablet. To my surprise, not only did I find one, but it was the one I was looking for on the previous visit – the Motorola Xoom.

Yes, for whatever reason, Best Buy determined that the Xoom belonged with their notebooks in the back, and not with the tablets on display at the front of the store. And when I say “back”, I mean at the far end of the notebook display. On top of that, it was displayed along side netbooks cheaper than the Wi-Fi only model by as much as $200. Short of putting it with the washing machines, Best Buy could not have positioned the Xoom any more poorly.

That said, I can’t entirely disagree with their decision to hide the Xoom away. Compared to the iPad and Galaxy Tab, the Xoom’s interface felt practically indecipherable. Maybe the ability to figure out its unintuitive location in the store is a test to see if you have the mindset to figure out how to use it.

Whatever the case, the Xoom sure wasn’t getting much love at Best Buy in the back with the netbooks. On the other hand, both days I was there, the prominently placed tablet display was deserted, while the iPads were consistently in use. Location is an important factor in retail, but when it comes to tablets, it’s clearly not the most important one.